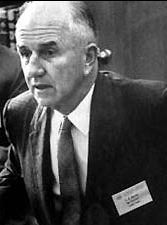 Stephen Davison Bechtel was the son of Warren A. Bechtel, the founder of the Bechtel Corporation and the president of the company from 1933 through 1960.

Stephen served with the 20th Engineers, part of the American Expeditionary Force sent to assist France in World War I. After the war, in 1919, he attended the University of California, Berkeley for one year to work for his father's company full time. He became vice-president of Bechtel in 1925 and became president in 1933, when Warren Bechtel died suddenly while traveling abroad. His father's death came at a critical time for the company: concrete was being poured for the Hoover Dam, Bechtel's largest project up till that point. Stephen became president and saw the company through the construction of the Hoover Dam. Over the next thirty years, he expanded Bechtel into a huge and successful engineering company with operations all over the world. Stephen handed the presidency of the company over to his son, Stephen Jr. in 1960, but stayed on as the chairman until 1969.

Stephen was awarded an honorary degree in Agricultural Science by UC Berkeley in 1954. In 1980, the school completed construction of the Bechtel Engineering Center, which was named in his honor.

Stephen Bechtel died in 1989. He is buried in Mountain View Cemetery in Oakland, California.

Retrieved from "https://ethw.org/w/index.php?title=Stephen_Bechtel,_Sr.&oldid=147167"
Categories:
This page was last edited on 26 February 2016, at 20:11.
About ETHW
Policies and disclaimers