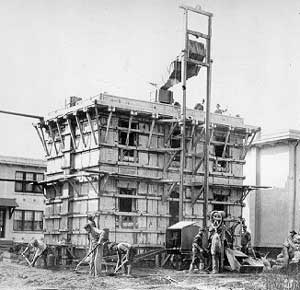 Thomas Edison’s futile efforts at iron-ore refining were one of the few failures in an otherwise illustrious career. By the late 1890s, after almost 10 years of effort and a huge loss of money, he abandoned the business. Edison may have been down, but he wasn’t out. In his typical way he tried to turn failure into success. In 1899, using leftover heavy equipment, he founded the Edison Portland Cement Company. Although at that time concrete (of which cement is a major component) was rarely used, Edison’s promotion of cement helped launch the industry. One of the ways he promoted cement was by building and selling low-cost concrete houses. Unfortunately, although his intentions were good, concrete housing added a second link in Edison’s growing chain of failures.

Edison’s concrete housing effort began around 1908. Portland cement (which Edison did not invent) was coming into fashion as a construction material. Edison and his team worked on perfecting a formula for mixing concrete (a mixture of cement and filler materials such as sand or gravel) and building re-usable steel molds to cast the walls of houses. By 1910, he had cast two experimental buildings—a gardener’s cottage and a garage—at his New Jersey mansion Glenmont. He announced in the press that he did not intend to profit from the venture, but would instead give away the patented information to qualified builders. 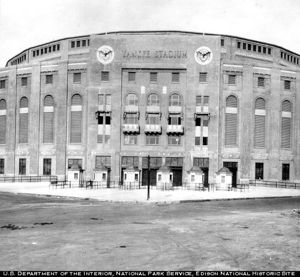 The publicity generated by this announcement attracted the attention of philanthropist Henry Phipps who proposed using the concrete houses to solve New York City’s housing problems. At that time large influxes of immigrants created a severe housing shortage in New York. Housing conditions were often congested, unsafe, and unhealthy. Reform-minded Phipps declared that he would build a whole city of the houses, which would be rented to working class families for $7.50 per month.

Edison suggested that along with the concrete walls, the houses should have cast-concrete furniture, pianos, refrigerators, and even phonographs. However, Edison had difficulties making the molds for the houses, never mind the accoutrements. One problem was the sheer number of pieces needed. Edison estimated that it would require mold composed of 2300 pieces to make just the house. This meant that any builder who wanted to get into the business would have to invest about $175,000—a huge amount of money in that day. Gradually, it became clear that the concrete housing would take much more effort to develop than Edison was willing to invest. When he got involved in a project to make a new kind of disc phonograph, he dropped the concrete housing project entirely.

In part because Edison never provided builders with complete plans for concrete homes, few attempted to construct them. Several were built by builder Frank Lambie and investor Charles Ingersoll in Union, New Jersey, where they are still inhabited by families. As for Edison, the Edison Portland Cement Works was not very profitable until the 1920s but later failed during the Great Depression.

Retrieved from "https://ethw.org/w/index.php?title=Concrete_Housing&oldid=119971"
Categories:
This page was last edited on 14 September 2015, at 17:14.
About ETHW
Policies and disclaimers