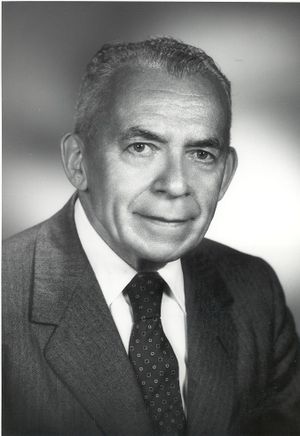 Peter L. Bellaschi was born on February 13, 1903, in Piedmont, Italy, and came to the United States in 1913, graduating from Fitchburg High School (Massachusetts] in 1922. He attended the Massachusetts Institute of Technology, receiving a Bachelor of Science Electrical Engineering Degree in 1926, and the.Master of Science degree in Electrical Engineering, also at MIT, in 1928, after spending twelve months on the Student Course at Westinghouse Electric Corporation.

Returning to the Westinghouse Transformer Division. he engaged in major problems that challenged the Electric Power Industry during the period of 1928-1939. In 1937 he was given the Westinghouse Order of Merit for outstanding contributions to high voltage engineering, lightning research, transformer insulation design and to the advancement of the art in insulation coordination. In 1940 he received an honorary Doctor of Science degree from Washington and Jefferson College. During the 1943-1947 period he contributed most significantly in engineering of the TIDD Project. which projected the USA into the extra high voltages (EHV) of 345kV and 500kV.

Since 1947, he has lived in Portland. Oregon, engaged as a private consultant to utilities and industries throughout the world, including extensive work for the Doble Engineering Company on preventative maintenance of electrical equipment.

One of Dr. Bellaschi's most comprehensive recent accomplishments hes been as a consultant to the Bonneville Power Administration on high voltage transmission, transformation, insulation coordination and protection. He played a major role in the development and design of the BPA 500kV main grid and in advanced studies of 1200kV.

He was recognized world-wide for his accomplishments and participation in the Institute of Electrical and Electronics Engineers, International Electro-technical Commission and the International Conference of Large High Voltage Systems (CIGRE]. He was an honorable mention for the 1936 Eta Kappa Nu Outstanding Young Engineer Award, elevated to the grade of "Fellow" in the IEEE in 1940, and the recipient of the 1982 IEEE William M. Habirshaw Award. His broad activities have led to the development of many friendships. Members of various IEEE Power Engineering Society committees and subcommittees remember well his dramatic technical reports presented at those meetings.

Dr. Bellaschi and his wife, Maria, (married October 30, 1930) followed the arts, especially music and the stage. Their favorites have been Arturo Toscanini, Katherine Hepburn on stage, and, Luciano Pavarotti. They had four children and eight grandchildren who have inherited Dr. Bellaschi's thirst for knowledge and were pursuing advanced educational careers.

Retrieved from "https://ethw.org/w/index.php?title=Peter_L._Bellaschi&oldid=195191"
Categories:
This page was last edited on 30 September 2022, at 19:05.
About ETHW
Policies and disclaimers