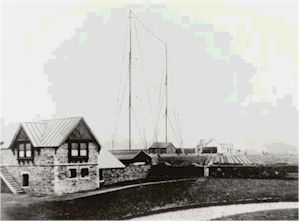 On December 12, 1901, a radio transmission of the Morse code letter 'S' was broadcast from this site, using equipment built by John Ambrose Fleming. At Signal Hill in Newfoundland, Guglielmo Marconi, using a wire antenna kept aloft by a kite, confirmed the reception of these first transatlantic radio signals. These experiments showed that radio signals could propagate far beyond the horizon, giving radio a new global dimension for communications in the twentieth century.

The plaque can be viewed at the National Trust Visitor Center in Poldhu, Cornwall, England. NOTE: currently (2015) the plaque has been put in storage to protect it.

The land on the coast of Cornwall was acquired in 1900 from Viscount Cliften and work started on its construction in October of the same year. Sir John Ambrose Fleming was responsible for designing all the heavy plant apparatus, and Guglielmo Marconi devised the aerial circuits.

The size of the Poldhu station in comparison with its predecessors was tremendous. One of its key features was the aerial system, which consisted of about 400 wires suspended in an inverted cone from a 200-foot circle of 20, 200 feet high masts. Unfortunately, this system was destroyed in a wind storm on 17 September 1901. Lacking sufficient time to reconstruct the Poldhu station to a higher standard, Marconi elected to undertake a makeshift repair and erect a temporary antenna. The new antenna system was much less complex than the first and consisted of two masts, each a hundred and seventy five feet high, separated from each other by a distance of one hundred and eighty feet. Between the two masts, a copy wire was strung, from which sixty vertical wires were suspended in a fan-shaped configuration to serve as an aerial.

On 12 December 1901, Marconi, who was in St. John's, Newfoundland, (corresponding IEEE Milestone) received the first transatlantic radio signal from Poldhu, the letter "s" in Morse Code, a distance of more than 2,000 miles!