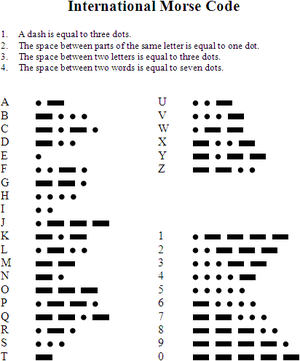 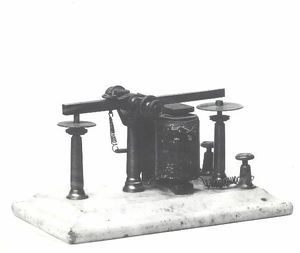 Morse code is a communications language created by Samuel Morse and Alfred Vail originally to be used with the telegraph. Each letter of the alphabet is made up of combinations of dots and dashes that were originally sent over telegraph wires or by radio waves from one place to another. Morse is the earliest type of digital communications, as the code is made solely from Ones and Zeros (ons and offs). It was the only way to rapidly communicate over very long distances before voice communications and two-way radios were able to do the job better. Morse Code communications can tolerate noise in the communication channel that would otherwise prevent voice (SSB, AM or FM) communications.

Perhaps the most famous "word" in Morse Code is SOS. Contrary to popular belief, SOS does not mean “save our ship,” although it often did just that. Rather, it was chosen as the international Morse code distress signal, because the three dots for S and the three dashes for O (... --- ...) make a clear and distinct signal.

An example of the SOS sound:

Before SOS became the standard radio distress signal, there were others. CQ (“seek you”) was a general call to any station. D was internationally recognized in telegraph cable traffic to precede urgent messages, thus CQD (-.-. --.- -..) meant “urgent message to any station.” 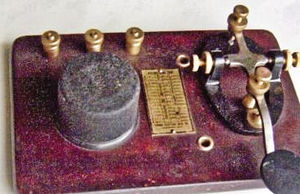 At the First Congress of Wireless Telegraphy in 1903, the Italians suggested SSSDDD (... ... ... -.. -.. -..) to combine the distinct three dots of the S with the urgency of the D. German radio operators used SOE (... --- .) but quickly realized that the single dot of the E could get easily lost in the static noise. For that reason they had already shifted to SOS by the time of its adoption at the International Radio Telegraphic Convention of 1906. The United States did not adopt SOS until after the Titanic disaster in 1912.

A handful Nokia engineers used morse code as their standard alert tone when short message service (SMS) messages were received, of course the morse code reads SMS.This was implemented by them circa 1985 (guess).

In 1995, the United States Coast Guard ended the use of Morse Code transmissions in its maritime communications service, signaling the end of an era in the history of communications.

While morse is nowdays commercially unused, and no longer examined for radio licences, it does have widespread use in Amateur Radio, and oddly the @ symbol is formally allocated as a new international Morse Code character in February 2004. The new sign, known as a "commat," consists of the signals for "A" (dot-dash) and "C" (dash-dot-dash-dot), with no space between them.

In 2008 a WW2 morse code key was dropped into the Indian Ocean on 28 April as part of a remembrance service for the lost crew of HMAS Sydney which was sunk in 1941.

The following code definitions were used for telegraphy (not wireless) in the Americas and Europe. There are other morse variants for Japan.

The wireless telegraphy morse code sequences are derived from the wired telegraphy code and are shown in the sound summary below. Morse used in wireless telegraphy is colloquially known as CW (Continuous Wave). The practical use of morse code involves the use and recognition of many abbreviations, and as can be seen in the 1920's, there are 'short numercial' sequences defined.

In these modern times, why would anyone want to learn a commercially obsolete ‘language’? Here is some food for thought:

The best way to learn Morse is to listen. A variety of software program can be downloaded onto iPads, Mac and PC’s to facilitate this, and also there are radio beacons run by radio clubs to allow you to practice receiving Morse code off air. The following are suggestions are for the readers benefit, and not endorsed in any way.

Listen to the Code[edit | edit source]

Retrieved from "https://ethw.org/w/index.php?title=Morse_Code&oldid=114679"
Category:
This page was last edited on 15 January 2015, at 16:38.
About ETHW
Policies and disclaimers