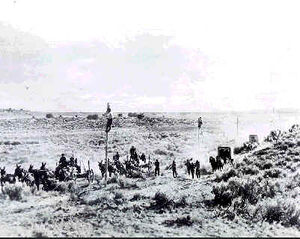 Between July 4 and October 24, 1861, a telegraph line was constructed by the Western Union Company between St. Joseph, Missouri, and Sacramento, California, thereby completing the first high-speed communications link between the Atlantic and Pacific coasts. This service met the critical demand for fast communications between these two areas. The telegraph line operated until May 1869, when it was replaced by a multi-wire system constructed with the Union Pacific and Central Pacific railway lines.

The plaque can be viewed in the Fort Laramie National Historic Site, 3 miles west of the town of Fort Laramie on highway 160.

Built during 1861 by the Western Union Telegraph Co. and its associates, the Transcontinental Telegraph, which connected St. Joseph, Missouri and Sacramento, California, reached Fort Laramie from the east on August 5, 1861. The first high-speed link between the East and West coasts, the line operated until May 1869 when the transcontinental railroad was completed and the telegraph lines were moved to follow its route.

When construction began in the summer of 1861, the path was filled with obstacles. The Civil War made heavy demands on labor and supplies. In one case, the political tensions led to the destruction and subsequent rerouting of the line. Nature presented roadblocks, too. The Great Plains certainly weren't a fruitful source of timber for telephone poles; workers had to cross the Rocky Mountains and the Sierra Nevada. But there were strong incentives, primarily financial, to complete the line, too. The prospect of spending a bone-chilling winter in the wilderness spurred completion as well.

Edward Creighton, a Western Union general agent, organized two teams of builders, one to work on the line from the West , the other from the East. On October 18, 1861, the workers of the one subcontractor, Pacific Telegraph Co. reached Salt lake City , completing the eastern section of the line. The western section, shorter but covering more difficult terrain, was finished by the Overland Telegraph Co., another subcontractor, on October 24.

That evening, the first messages were sent to President Abraham Lincoln. The message from Horace W. Carpentier, president of the Overland Telegraph Co., read: "I announce to you that the telegraph to California has this day been completed. May it be a bond of perpetuity between the states of the Atlantic and those of the Pacific."