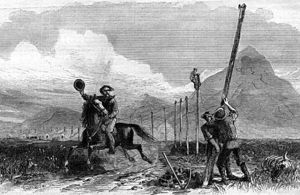 Wood engraving of the construction of the First Transcontinental Telegraph, with a Pony Express rider below. (from Harper's Weekly, November 2, 1867) 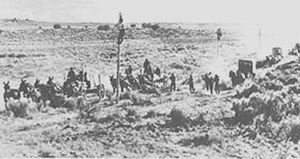 The laying of the transcontinental telegraph line. Although the telegraph ushered in the age of instantaneous, global communications, laying the line was quite a primitive feat. Donkeys and wagons were used to bring in equipment and supplies such as wire and insulators. 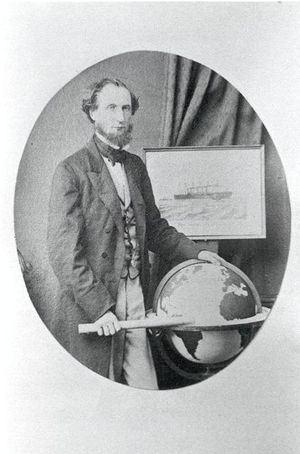 Just before the start of the Civil War, Congress offered a subsidy to any company agreeing to build the transcontinental telegraph.

The project was so risky that government support was necessary to convince investors to undertake it. On 20 September 1860, Hiram Sibley, president of Western Union, submitted a bid for $40,000 to build the line. Building began in Salt Lake City, Utah and moved both east and west. The Pony Express continued to cover the missing links as construction proceeded. The wire used was galvanized iron “of the best quality.” Insulators were an iron holder embedded in glass which in turn were enclosed in wooded forms. Poles were to be found “en route” (not so easily accomplished on the treeless plain). Western end materials were shipped around the Cape Horn to San Francisco. A wet cell provided 50 volts of power over a distance of 800 km (497 miles), which was unusually long because of low leakage due to low humidity.

The line was finished in October, 1861, just a few months after the onset of the Civil War. On 24 October, Stephen J. Field, Chief Justice of California and brother of Atlantic cable promoter Cyrus Field, sent a message to Abraham Lincoln assuring him of California’s loyalty to the Union and promising that the telegraph line would “be the means of strengthening the attachment which binds both the East and the West to the Union.” Like the advent of many technologies, the age of the telegraph signaled the demise of previous methods of communication. Once the telegraph connected the United States the famed and legendary Pony Express discontinued service.

Retrieved from "https://ethw.org/w/index.php?title=Transcontinental_Telegraph_Line_(U.S.)&oldid=157844"
Categories:
This page was last edited on 23 November 2017, at 06:49.
About ETHW
Policies and disclaimers