On 28 August 1895 electricity generated at this location was transmitted to the city of Šibenik, where six power transformers supplied a large number of street lamps. This early system of power generation, transmission and distribution was one of the first complete multiphase alternating current systems in the world and it remained in operation until World War I.

The plaques, in English and Croatian may be viewed at the Jaruga I power plant. Only ruins of the first power plant (Jaruga I) exist today. But the the power plant built in 1903 (Jaruga II) is still in operation. GPS: 47.48' N;15.58'E 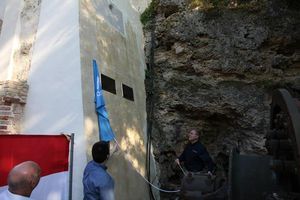 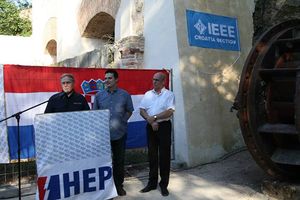 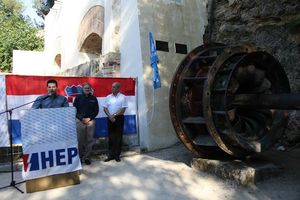 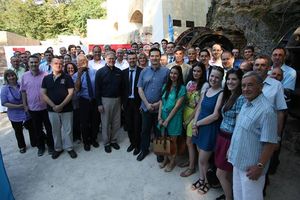 Attendees at the the Krka-Sibenik Milestone dedication

Krka-Šibenik was the first alternating current electric power system in Croatia and one of first multiphase alternating-current systems in the world. Two generators (42 Hz, 550 kW each) and the transformers were produced by the Hungarian company Ganz. The transmission line from the power plant to the City of Šibenik was 11.5 kilometres long and the municipal distribution grid 3000/110V included six transforming stations. The system Supplied 340 street lights and some electrified houses in the town. Three years later after the first Jaruga power plant, the construction of the second Jaruga hydro plant began. Two three phase, 50 Hz, 5.5 MW generators were installed. A new transmission system was built and local grid enlarged. The historical and social significance of Krka - Šibenik were presented at the 2007 History of Electro technology Conference in Newark, NJ.

At the time when Krka - Šibenik was built there was no transmission system for larger distance, Krka-Šibenik was one of first integrated systems. It was a two-phase system in time when major cities like London and Roma had one-phase systems. At the time multiphase systems were considered less secure. With time other cities also adopted multiphase systems, this is kept up until today. Ganz & Co had previously built an alternator in Rome Tivoli (A1) - a single-phase generator which remained in operation for a limited time. The Power Plant Jaruga 1 (in the Krka-Šibenik system) held Ganz's first multi-phase generator (A2). Furthermore, the Krka-Šibenik system was unique in many ways. Several Zipernowsky, Bláthy and Déri (who, at the time, all worked for Ganz) inventions were first used in Šibenik: ZBD transformers, Blathy watt-meters, etc. The transmission line was also quite interesting. Built on wooden poles it had six wires, four power conductors (double two-phase line) and a communication (telephone) line. As the power system was set to operation on the night of 28 August 1895, the telephone line (on the transmission poles) was used for communication between the "control centre" (Villa Meichsner) and the power plant.
This was one of the first commercial power systems, supplying an entire city with multiphase electric power.

A timeline is included in the following paper: http://ieeexplore.ieee.org/stamp/stamp.jsp?tp=&arnumber=4400640. Of course, as any, this timeline does not list all early power systems.

Krka-Šibenik was the first implementation of Ganz's 2-phase alternator (the "A2"). Several famous engineers worked at Ganz, including Károly Zipernowsky, who together with Miksa Déri and Ottó Bláthy, is credited for the construction (and patent) of the first transformer and several other important AC technologies. A large number of the Zipernovsky, Déri, and Bláthy patents were first implemented in Ganz early power systems, including Krka-Šibenik.

In any of the previous similar systems were either for an experiment or for an exhibition; this one was not, it was intended as a commercial system supplying a city (Šibenik) with (multiphase) electric power.