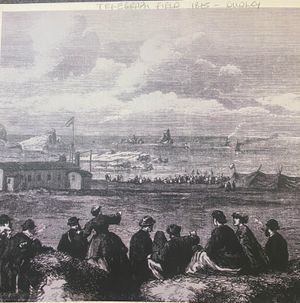 Cable field at Valentia in 1865 from the Illustrated London News

On July 13, 1866 the Great Eastern steamed westward from Valentia, laying telegraph cable behind her. The successful landing at Heart's Content, Newfoundland on July 27 established a permanent electrical communications link that altered for all time personal, commercial and political relations between people across the Atlantic Ocean. Later, additional cables were laid from Valentia and new stations opened at Ballinskelligs (1874) and Waterville (1884), making County Kerry a major focal point for global communications.

The three plaques can be viewed in the three old Valentia, Ballinskelligs, and Waterville cable stations, near the towns of Portmagee, Dungegan, and Waterville (respectively) at the end of the Iveragh Peninsula, in County Kerry, Ireland. The GPS coordinates are:51.892548,-10.389205

The discoveries of electricity in the latter half of the 18th Century, and its close connection with magnetism, were the products of earlier experiments, which in turn led to the invention of the electric telegraph. Telegraphy had connected the interior of the United States, and it also connected Europe together. However, connecting the Americas and Europe proved to be a challenge. Due to the electric current that ran through the cable lines, insulation and waterproofing was necessary. The discovery of gutta percha, a gum like substance proved to be a satisfactory waterproof insulator.

A new company, the Anglo American Telegraph Co. raised £600,000 to make another attempt at laying the cable. The Great Eastern was overhauled, and in June 1866 the ship left Valentia, Ireland and sailed for Trinity Bay without mishap. The cable arrived at Heart's Content, (corresponding IEEE Milestone) on 27 July 1866. Europe and the Americas had finally been connected. The Great Eastern was also able to recover the 1865 cable, and two Atlantic cables were working.

County Kerry has dedicated part of their web site to this event. http://www.historic-ireland.com/places/799.html

There is a documentary video about Valentia's role in the transatlantic cable.