Milestones:Landing of the Transatlantic Cable, 1866 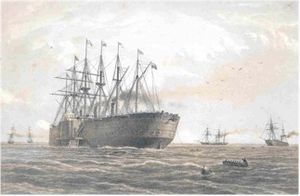 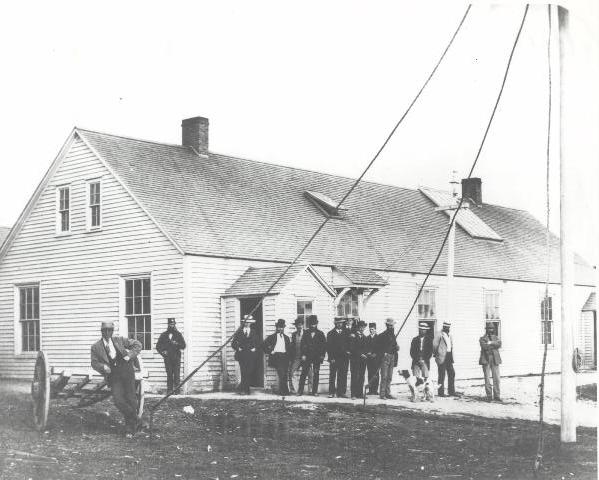 A permanent electrical communications link between the old world and the new was initiated at this site with the landing of a transatlantic cable on July 27, 1866. This achievement altered for all time personal, commercial, and political relations between peoples on the two sides of the ocean. Five more cables between Heart's Content and Valentia, Ireland were completed between 1866 and 1894. This station continued in operation until 1965.

On Friday, 13 July 1866, the Great Eastern, by far the largest ship afloat, left Valentia, Ireland , (corresponding IEEE Milestone) with 2730 nautical miles of cable in her hold. Fourteen days later 1852 miles of this cable lay at the bottom of the ocean, the ship was at anchor in Trinity Bay, Newfoundland, and the old and new worlds were in permanent telegraphic communication.*

The quest to establish a transatlantic telegraphic link took twelve years and five attempts at laying the cable, demanding the confidence and expertise of countless financiers, electrical engineers, scientists, and sailors. Cyrus Field, who had made enough money in the paper trade to allow him to retire at age thirty-five, decided to back the laying of the transatlantic cable in 1854. He talked to Matthew Maury, a leading oceanographer, to find out if laying a telegraph cable on the ocean floor between Newfoundland and Ireland was possible, and then to Samuel Morse to ask if, once in place, such a cable would work. After being assured that the project was indeed feasible, Field was ready to seek financial backers.

Field and nine associates then formed the American Telegraph Co., which soon ranked As one of the top six telegraph companies in North America. By mutual agreement, these companies established regional operating boundaries, and Newfoundland, New Brunswick, and the United States' eastern seaboard became American's territory. A clear path of communication from Canada to Florida now existed for the messages which would come over the proposed transatlantic cable.

The next several months were spent in establishing still another company, the Atlantic Telegraph Co., choosing the cable design, manufacturing the cable, finding backers, and securing agreements of support of the project from both the British and American governments. Then, on 5 August 1857, the American steam frigate Niagara and the Royal Navy's steamer Agamemnon left Valentia Bay, Ireland, each with half-an- ocean's length of cable in her hold. After laying about four hundred miles of cable, however, the line snapped and could not be recovered from the ocean floor.

During the next ten months, improvements were made to the machinery for laying out the cable, a better insulating compound was developed, William Thomson (later Lord Kelvin) invented his mirror galvanometer, which was used for improved detection of the signals coming over the cable, and still more capital was raised. The cable, which had been stored on the docks at Plymouth, England, was reloaded onto the Niagara and the Agamemnon, and the ships left Valentia Bay on 10 June 1858. This time, only one hundred and sixty miles of the cable had been laid when it broke. Field pushed to try again immediately. The two ships met in mid-ocean on 29 July, spliced the cable, and steamed off in opposite directions, laying the cable as they went. Both reached their respective ports in Newfoundland and Ireland on 5 August 1858; transatlantic communication by telegraph was a reality. The glory was short-lived, however. The cable was dead by 18 September.

This was the worst set back in the troubled story of the transatlantic cable. It was nearly impossible for Field to find backers for another attempt. The British government was reluctant to increase its support of the project. And the political situation in the US in 1859 gave little priority to Field's venture.

To investigate the special problems of submarine cables, a commission was set up under the British Board of Trade. Between 1859 and 1860, the commission, which included such notables in the field of telegraphy as Charles Wheatstone and Latimer Clark, carried out experiments on the construction, insulating, testing, and laying of cables. The final opinion of the commission was that... a well-insulated cable, properly protected, of suitable specific gravity, made with care, and tested under water throughout its progress with the best known apparatus, and paid into the ocean with the most improved machinery, possesses every prospect of not only being successfully laid in the first instance, but may reasonably be relied upon to continue for many years in an efficient state for the transmission of signals.**

But, even with this official vote of confidence, Field was unable to interest the British government, which felt that support of the cable project might imply an alliance with the industrial North of the war-torn United States. Finally, an encouraging break came in 1862 --- Glass, Elliott and Co. offered to make and lay the new cable and to put up $125,000 as well, in return for reimbursement of materials and labor costs, plus an additional 20% of the cost of the line. With this promise of support, Field then turned to the private sector in both Britain and the US to raise the necessary capital. Although this canvassing was quite lucrative, by the beginning of 1864 more than half of the needed funding still had to be raised. It seemed that all of the government and private sources had been tapped to their limits.

Then, a catalyst appeared in the form of Thomas Brassey, a railroad entrepreneur and London financier. After talking with Field, Brassey agreed to be one of ten to supply the remaining funds. Brassey's endorsement was enough to bring John Pender, a Manchester industrialist, into the group of ten. Pender took things a step further, though, by heading the merger of Glass, Elliott and Co. and Gutta Percha Co. to form Telegraph Construction and Maintenance (TC&M). Not only did TC&M handle all aspects of the cable's construction, but the company also subscribed the remaining necessary capital. All Field needed now was a ship to lay the cable.

Isambard Kingdom Brunel's Great Eastern had captured the popular imagination. She was by far the largest ship afloat, measuring 693 feet in length and 120 feet in width. She could carry a load of 18,000 tons in her double hull and her coal bunkers could hold enough fuel to take her from England to Australia and back. From the beginning, though, the Great Eastern had been a major money loser. So, when she was put up for auction in January 1864, Daniel Gooch, with the financial help of Field and Brassey, bought the Great Eastern for $125,000 (she had cost $5 million to build) and put her at the disposal of the cable laying expedition.

On 23 July 1865, the Great Eastern began laying out the new cable, which had been manufactured according to much stricter technical specifications. But, once again, the cable accidentally snapped and was lost --- this time only 600 miles out from the Newfoundland coast. This trip proved, however, that the improved methods of making and laying the cable were sound, and few people doubted that the next attempt would succeed.

So, again, capital had to be raised. The newly-formed Anglo-American Telegraph Co., TC&M, and a few British capitalists answered the call. A new cable was constructed, the Great Eastern was again called into service, and, on 13 July 1866, the cable laying began. Two weeks later, the cable was landed and began operating at Heart's Content, Newfoundland. The Great Eastern then returned to the spot where the 1865 cable had been lost, retrieved it from the ocean bottom, spliced it, and paid out the remaining 600 miles back to Newfoundland. By 8 September 1866, not one but two telegraph lines were sending messages across the Atlantic.