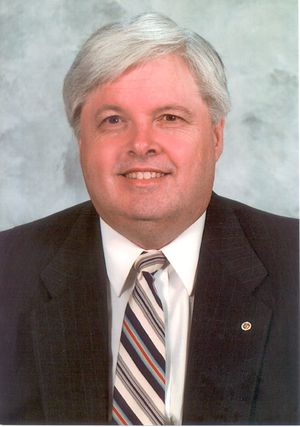 Kenneth R. Laker, IEEE President, 1999, is the Alfred Fitler Moore Professor of Electrical Engineering at the University of Pennsylvania, where he also served as department chair. He is a co-founder of DFT Microsystems in Norristown, PA. He held positions with the Air Force Cambridge Research Labs in Cambridge, Massachusetts and AT&T Bell Labs in Holmdel, New Jersey.

Kenneth R. Laker received the B.E. degree in electrical engineering from Manhattan College, Riverdale, NY, in 1968 and the M.S. and Ph.D. degrees from New York University in 1970 and 1973, respectively.

Dr. Laker is the Alfred Fitler Moore Professor of Electrical Engineering at the University of Pennsylvania in Philadelphia, where he has taught since 1984 and served as department chair until 1993. He also is a co-founder of DFT Microsystems in Norristown, PA. He has held positions with the Air Force Cambridge Research Labs in Cambridge, Massachusetts and AT&T Bell Labs in Holmdel, New Jersey. His work in microelectronic filters has contributed four textbooks, more than 90 scientific articles, and six patents.

The awards he has received include the 1994 AT&T Clinton Davisson Trophy for his patent in switched capacitor circuits and the 1998 IEEE Circuits and Systems Darlington Award for the paper “Integrated Circuit Testing for Quality Assurance in Manufacturing: History, Current Status, and Future Trends,” which was published in IEEE Transactions on Circuits and Systems—II: Analog and Digital Signal Processing (August 1997).

An IEEE Fellow and IEEE History Center Trustee, Dr. Laker's three decades of IEEE service include terms on the IEEE Board of Directors as President, Division I Director, as well as chair of the IEEE Philadelphia Section and president of the IEEE Circuits and Systems Society (CAS). His enthusiasm and dedication have been the driving force behind the IEEE's Internet initiatives. He was an early motivator behind what became the IEEE website, the award winning IEEE Virtual Museum and IEEE Xplore, the online delivery system for IEEE publications. Equally active in pursuing IEEE's educational goals, Dr. Laker made key contributions to the Sloan Career Cornerstone Series, a multimedia career resource for university students. Originally developed in the mid 1990s, this resource is now entirely web-based as a result of his influence. As vice president of IEEE Educational Activities, Dr. Laker initiated the establishment of IEEE President's Scholarships, as well as spearheaded Industry 2000, the first IEEE global initiative to develop industry support for continued professional development.

Professional Vitality through Life-Long Learning - Presented by Ken Laker on the relationship between the profession and education.

Retrieved from "https://ethw.org/w/index.php?title=Kenneth_Laker&oldid=146435"
Categories:
This page was last edited on 2 February 2016, at 18:03.
About ETHW
Policies and disclaimers