The Heritage of the IEEE Broadcast Technology Society 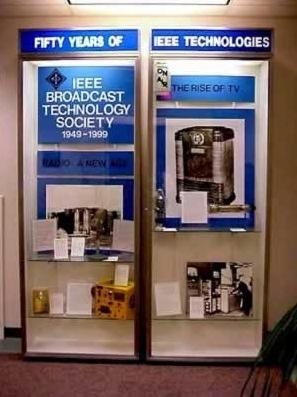 A group of electrical engineers, including men like Thomas Edison and Alexander Graham Bell, met on May 13, 1884, in New York City and formed the American Institute of Electrical Engineers (AIEE). Their aim was to understand electrical technology more thoroughly and extend its usefulness. Edison’s electric lights were being installed in factories, stores and schools. The telephone was less than a decade old.

A generation later a dramatically new technology emerged that was to have equally profound consequences on daily life-RADIO. So different was radio technology that its practitioners felt the need to form a separate society, the Institute of Radio Engineers (IRE). The IRE was founded in 1912 and soon became an international society of engineers interested in the new field of radio.

In the early years, maritime radio was the most important segment of the industry, and they formed the first local Sections of the IRE. In the post World War I years, broadcasting became more important, and many of the Sections consisted largely of broadcast engineers. The technical areas of expertise were centered in the IRE Technical Committee structure. Also, during the period from 1937 to 1947 several Broadcast Engineering Conferences were held.

The years after World War II brought drastic changes to the field of electrical engineering. Electronics technology was moving rapidly: radar, computers, solid-state electronics, and space exploration created jobs for electrical engineers, and this translated into an increase in IRE membership. In order to accommodate these diverse fields of interest, the IRE, in March, 1948, adopted the Professional Group System.

In the early years, the Group was not sufficiently organized to sponsor a national symposium, but some of the local Chapters did hold technical meetings. The Professional Group on Broadcast Transmission Systems sponsored a "Broadcast Day Symposium" during the 1951 IRE National Convention.

The first issue of the "IRE Transactions on Broadcast Transmission Systems" was published in March, 1955, and contained papers that were presented at the Fourth Annual Broadcast Symposium held in Cleveland, Ohio on September 24-25, 1954. The Group also published a Newsletter much like the one that is being reactivated under the editorship of John Tollefson.

The merger of the AIEE and the IRE was accomplished in January, 1963 to form the Institute of Electrical and Electronics Engineers. The Professional Group system was carried over to the new organization, and the broadcast activity was identified as the IEEE Professional Technical Group on Broadcasting, and later as the IEEE Group on Broadcasting. In 1976 the IEEE was organized into Societies, and broadcasting became a part of the IEEE Broadcast, Cable and Consumer Electronics Society. Broadcast had its own Administrative Committee and the "Transactions on Broadcasting" continued as a separate publication.

In 1983 the IEEE Broadcast, Cable and Consumer Electronics Society was split into separate societies and the IEEE Broadcast Technology Society was formed. The Administrative Committee structure was maintained and the "Transactions on Broadcasting" continued. This is the organization under which we operate today.

(1983- First meeting of BT Society because TAB approved dissolution of BCCE and as a result, approved the formation of both the Broadcast Technology Society and Consumer Electronics Society).

(This group operated concurrently with the BTRC/Consumer Electronics Group. Both groups merged in 1976 to form the BCCE Society.)

(This group operated concurrently with the Broadcast Group/Group on Broadcasting. Both groups merged in 1976 to form the BCCE Society.)

Retrieved from "https://ethw.org/w/index.php?title=IEEE_Broadcast_Technology_Society_History&oldid=72687"
Categories:
This page was last edited on 23 February 2012, at 14:58.
About ETHW
Policies and disclaimers