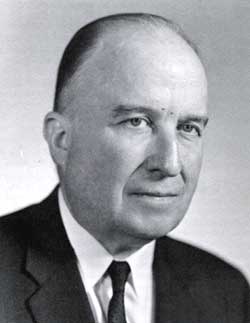 Harry F. Olson, a pioneer in the field of 20th century acoustical engineering, was born in Mt. Pleasant, Iowa to Swedish immigrant parents. Technically inclined from an early age, Olson went on to earn a bachelor's degree in Electrical Engineering and a doctorate in Physics from the University of Iowa. Immediately after completing his course of study in 1928, Olson moved to New Jersey to work for RCA Laboratories. Olson would remain at RCA for almost four decades.

Olson had a continuing interest in music, acoustics, and sound reproduction, and, by 1934, he was placed in charge of acoustical research at RCA. At RCA, Olson worked on a wide range of projects, which included developing microphones for the broadcasting and motion picture industries, improving loudspeakers, and making significant contributions to magnetic tape recording. Like many engineers of the World War II generation, Olson also made significant contributions to military technology as well, particularly to the fields of underwater sound and anti-submarine warfare. After the war Olson, along with Herbert Belar, developed the first modern electronic synthesizer. Equipped with electron tubes, their synthesizer was used to compose music, which was recorded and sold to the public.

A prolific inventor and engineer, Olson won more than 100 patents for the various types of microphones, loudspeakers, recording equipment, phonograph pickups, underwater sound equipment, sound technology in motion-pictures, and public-address systems he developed. He also authored 135 articles and ten books. In 1952 Olson served as president of the Acoustical Society of America, which awarded him the silver medal in acoustical engineering in 1974 and the gold medal in 1981. He also served as president of the Audio Engineering Society. He was a fellow of the IEE and won the IEEE Lamme Medal in 1970, was elected to the National Academy of Sciences in 1959. He was the recipient of many honorary degrees. He died in 1982 in Princeton, New Jersey.

Retrieved from "https://ethw.org/w/index.php?title=Harry_Olson&oldid=146031"
Categories:
This page was last edited on 27 January 2016, at 18:41.
About ETHW
Policies and disclaimers