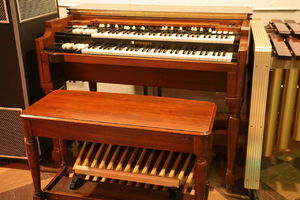 Since its introduction in 1950s, the Hammond B3 organ has been one of the most popular keyboard instruments in popular music. Its devotees range across decades and musical genres, and have included such greats at Ethel Smith, George Gershwin, Keith Emerson, and Greg Allman. Although the Hammond is one of the most popular electronic instruments, its beginnings sprang from a clock. In the 1930s, Laurens Hammond invented a new type of electric clock and was part owner of a company that made them. When the Great Depression created a serious downturn in the clock business, Hammond began looking for new products to invent and, hopefully, sell. Looking to make use of the precision electric motors like the ones that had powered his clock, Hammond turned to creating an electrical musical instrument.

To make his first instruments, Hammond used a piano keyboard to switch signals generated by a number of separate circuits on and off. Each circuit was capable of generating electromagnetic waves at a certain frequency. The frequency of each circuit was determined by a rapidly rotating “tonewheel,” a carefully machined magnetic disc that spun near an electromagnet. The shape of the wheel induced a signal in the electromagnet, giving the signal a specific frequency and wave-form. Combinations of these signals, switched on and off by pressing keys and setting switches, could be given a wide range of different sounds. Then the combined signal was amplified and played through a special loudspeaker. The Hammond Instrument Company used this basic design to introduce a number of electronic organs, the first customer being the famous industrialist Henry Ford. Their largest market, however, was churches, for which they proved a boon. The Hammond organ was less expensive than many pipe organs and more compact than almost any of them. There was just one problem: they sounded bad or at least they didn’t sound like the pipe organs they were striving to imitate.

When Hammond introduced the B3 in 1955 it was another variation of the original 1936 Model A. However, among the early customers of the B3 were African-American churches, whose limited finances compelled them to accept what might be seen as a second-rate substitute for a “real” organ. Fortunately, creativity escaped the limitations of technology. The sounds of the B3 were unique, powerful, and captivating, and the instrument began to be appreciated on its own terms. Gospel music recordings of the 1950s and 1960s began to accentuate the Hammond, giving the music a special sound. By about 1970, the B3s (and similar Hammond models) were embraced by all sorts of popular musicians, including rock, R&B, and jazz groups.

The growing popularity of the B3 for popular music, and especially for live performances, was surprising. Although smaller than a full-size church organ, the B3 still weighed in at about 400 pounds making it a pain for a band or its roadies to transport from show to show. But the sound of the B3 was so magnificent that it became one of the best-loved keyboard instruments of all time. Artists such as James Brown, Billy Preston, Ray Manzarek of The Doors, Jon Lord of Deep Purple, and John Paul Jones of Led Zeppelin brought the Hammond to a wider public and made it part of popular music.