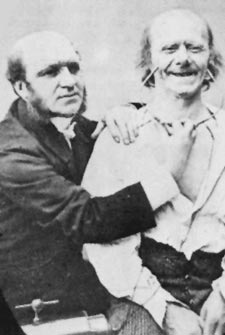 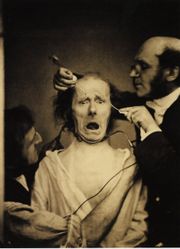 The search for ways to use electricity for medical treatment is well rooted in history. Peter Christian Abildgaard suggested the possibilities in a bizarre way in 1775, when he discovered that he could render a chicken unconscious with an electric shock, and then revive it the same way. In 1780, Luigi Galvani noticed that his static-electricity generator caused the muscles in a frog’s leg to contract. And between the late 1700s and early 1840s, when it first became known that each beat of the heart was accompanied by an electrical pulse, there was an explosion of interest in using electricity either to study or cure the body.

One of the key researchers during this period was French physician Guillaume Duchenne (1806-1875). Born in the coastal town of Boulogne-sur-Mer, he was not interested in following the path of his mariner father and instead pursued a career in medicine. This career was nearly derailed when his wife died during childbirth, leading to a depression in which he almost abandoned the field of science.  At the age of 36, Duchenne moved to Paris and developed a fascination with the ability of electricity, when applied to a patient’s skin, to cause muscle contractions.

Beginning in the 1840s, Duchenne used either batteries or Michael Faraday’s recently invented induction coil to apply currents to make muscles twitch, mapping the paths the current took through the body. As he learned more about the body, he found ways to apply the electrodes to isolate certain muscles. By applying voltage to muscles, even the muscles of the paralyzed or the recently dead, it was possible to make the muscle tissue twitch. Conducting extensive experiments on the hands, feet and arms, he carefully mapped the muscles that cause smiles, frowns, looks of anxiety and other facial expressions using what he called "localized faradization" (connecting the induction coil to the skin near the muscle) to determine what kind of electric shock resulted in a particular movement. He discovered that most motions were caused by a group of muscles working together rather than just a single muscle.

Duchenne also made limited progress using “faradic” (ac) currents to treat paralysis, finding that by applying high currents, certain patients could regain use of their muscles. His pioneering work eventually led to the field of neurology, or the study of the nervous system. In 1868 he was the first to extensively describe the progressive and destructive neuromuscular disorder now known as Duchenne Muscular Dystrophy (DMD). DMD causes the atrophy-- or wasting away-- of muscles. He remained hopeful that electricity would one day be used to help those suffering from DMD.

Duchenne regularly employed the relatively new technology of photography to document his results, using a variety of subjects including actors, children and Parisian indigents. He made a series of famous photographs showing how the muscles of the face were used to create facial expressions such as smiles and frowns and mapped these movements out. He noted, for example, that a fake smile used only the muscles around the mouth, but that a genuine smile caused facial contractions around the eyes. Duchenne published a book of his findings in 1862 that remained a standard text for many years.

Although remembered as the father of electrotherapy and neuropathology, Duchenne’s work was little appreciated at the time. When he died in 1875 of a cerebral hemorrhage after another serious bout of depression, the direct use of electricity for questionable medical purposes, rather than simply studying its effects on the body, was reaching its height. For the next 75 years, machines using “faradic” or “galvanic” (dc) electricity would remain in widespread use. Although few of these devices produced reliable results, it would be many decades before physicians were finally convinced that electrotherapy had only a very limited value in clinical medicine. Eventually, however, the findings of the early pioneers such as Duchenne helped establish the basis for clinical neurology and paved the way for more sophisticated treatment methods.

The Mechanism of Human Facial Expression.

Retrieved from "https://ethw.org/w/index.php?title=Guillaume_Duchenne&oldid=145923"
Categories:
This page was last edited on 26 January 2016, at 19:56.
About ETHW
Policies and disclaimers