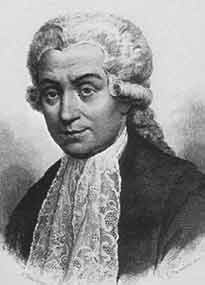 Luigi Galvani had a long and distinguished career as an obstetrician and surgeon, following in the footsteps of his doctor father. After being appointed to a position in anatomy at the University of Bologna in 1762, he married Lucia Galeazzi and became known as an innovative teacher. By the 1780s his major area of research had become animal electricity. He discovered the physiological action of electricity and demonstrated the existence of natural electric current in animal tissue. His research inspired Alessandro Volta's work.

Volta objected to Galvani’s conclusions about “animal electric fluid,” but the two scientists disagreed respectfully and Volta coined the term galvanism for a direct current of electricity produced by chemical action. The galvanometer, an instrument for measuring a small electric current, was also named after Galvani, who was correct in attributing muscular contractions to electrical stimuli. In 1790 Galvani’s wife died childless and he died eight years later, shortly after being dismissed from his university position when he refused to take the oath of allegiance required by the occupying Napoleonic army.

Galvani was a modest man whose theories, albeit flawed, prompted Volta’s discovery of the battery and presaged advances in medical science.

Galvani's work had an indirect influence on the author Mary Shelly and her writing of the novel Frankenstein.

Retrieved from "https://ethw.org/w/index.php?title=Luigi_Galvani&oldid=146540"
Categories:
This page was last edited on 3 February 2016, at 17:55.
About ETHW
Policies and disclaimers