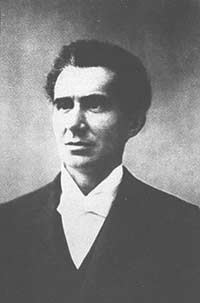 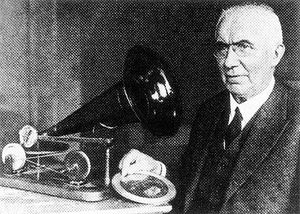 Berliner and his Gramophone

In 1877, Thomas Edison astounded the American public with the invention of the phonograph, a hand-cranked device that could record and play back sound on a rotating wax cylinder. But he regarded the device as little more than a toy. It had limited acoustic value. The sound quality was screechy and awkward, as the listener had to turn the cylinder by hand at an inconsistent speed. The tin recording plates would warp and tear, and the volume was very low. Alexander Graham Bell followed in the 1880s with refinements to Edison’s design, substituting a wax cylinder, but neither inventor developed the means to mass-produce recorded music.

Producing a recording was complicated. A musician had to sing or play into a large horn to produce enough amplification to be heard on a recording, making it impractical to gather more than a small band. Wax cylinders could not be reproduced at scale, which often forced musicians to record a given song dozens of times. Cylinders were bulky, forcing consumers to wonder if they had room for them in their homes. And culturally, recorded music had a unsavory reputation; the jukebox, first invented in the late nineteenth century, was associated with places of ill-repute. In sum, Edison saw little business potential in recorded music, and preferred to market the phonograph as a tool for business dictation.

By pushing the technology forward, Emile Berliner and his future business partner, Eldridge Johnson, changed the way Americans recorded and shared music. On 4 May 1887, Berliner, a German-born inventor, applied for a patent in Washington, D.C. on a "Gramophone" with a cylindrical recording surface, and on 26 September 1887, Berliner submitted a patent for a flat-disk record and player.

Berliner’s idea was to create a phonograph that would play flat, mass-produced disks. His Gramophone Company, operating in Camden, New Jersey, improved on Edison and Bell’s cylinders by recording sound with a lateral cut in the circular grooves of a flat surface rather than an up-and-down cut on the surface of the record. Berliner created the pattern followed for the next century of vinyl records: a groove of uniform depth with smooth bottoms but irregular walls. As the needle passed through these irregular walls, it would vibrate from side to side and reproduce the sound. The first model, introduced in 1888, used a flat disk, for which he devised mass-production techniques.

Berliner’s problem was not the disks, but the mechanism for playing them. In the 1890s, Eldridge Johnson, operator of a small machine shop in Camden, got his hands on a Berliner gramophone and began tinkering with its operation to make it as reliable and loud as a wax cylinder player. He improved on the design by creating a spring motor that would drive the machine and a device to hold its speed to a constant seventy rotations per minute. By the turn of the century, Johnson had produced a true musical player. In 1901, Berliner merged his company with Johnson’s to form the Victor Talking Machine Company.

Victor soon dominated the manufacturing of gramophones and records and found ways to market the product to a mass audience. Johnson convinced reluctant leaders in the music industry to put their artists on wax. One of his best-remembered creations was the Victor trademark of the dog listening to “His Master’s Voice.” This piece of intellectual property would outlive the Victor brand, whose declining fortunes in the 1920s led to a buyout by RCA in 1929.

Retrieved from "https://ethw.org/w/index.php?title=Gramophone&oldid=157604"
Categories:
This page was last edited on 23 November 2017, at 06:47.
About ETHW
Policies and disclaimers