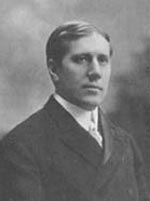 Eldridge Johnson was the co-founder of the Victor Talking Machine Company. Victor produced early record players and records. Victor ultimately became one of the largest companies in the United States and Johnson one of the richest men.

Johnson, like fellow recording pioneer Oberlin Smith, began his career as a mechanical engineer. He was born in Wilmington, Delaware in 1867, but did not become involved in the sound recording industry until 1896. By that time, Johnson was the owner of a small machine shop in Camden, New Jersey. Emile Berliner asked Johnson to design a spring-driven “motor” for his invention, the gramophone. The gramophone was the first record player that played music off of disks, not cylinders such as Edison’s phonograph. Berliner needed a spring-driven motor because most people still did not have electricity in their homes.

Johnson found Berliner’s gramophone lacking, and said it sounded like “a partially educated parrot with a sore throat and a cold in the head.” But Johnson was intrigued by the gramophone and quickly became obsessed with it. He and Berliner became partners and founded the Victor Company. Johnson was named president of the company. With their combined resources and ambition, the Berliner gramophone became the best selling form of record player on the market and Victor became one of the world’s largest companies.

Johnson was at the top of his career in the early 1920s and so was the record industry. But the coming of radio broadcasting in the mid-1920s sent the phonograph business into a crisis. Johnson decided to sell his share of the business. The sale made him so rich that he never had to work again.

In his retirement, Johnson pursued many new hobbies and became an important philanthropist. His passions for hunting and sailing continued, and he bought a series of ever-larger yachts that carried him around the world on hunting trips. For a time he collected jewels, but even this became boring. He gave money to the University of Pennsylvania to open a research institute, collected art (some of which was later proven to be forged) and became vice president of an organization opposed to the sale of liquor. His most interesting hobby, however, was collecting memorabilia related to Lewis Carroll’s book Alice in Wonderland. Johnson became fascinated with the book and eagerly sought out first editions and other bits of Alice history. Eventually he was able to purchase the original manuscript, which he proudly displayed. President Coolidge even organized an event at the White House so Johnson could show off the manuscript.

Johnson was in poor health at the time he sold his business in the late 1920s. He suffered from “melancholia” (depression), but lived for many more years. He finally died in 1945, one of the richest men in the United States.

Retrieved from "https://ethw.org/w/index.php?title=Eldridge_Johnson&oldid=145698"
Categories:
This page was last edited on 22 January 2016, at 19:32.
About ETHW
Policies and disclaimers