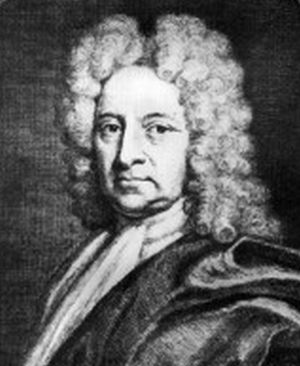 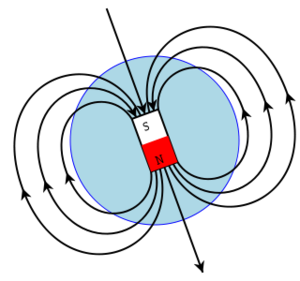 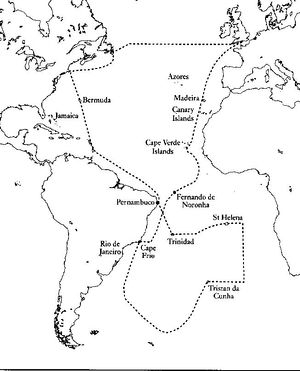 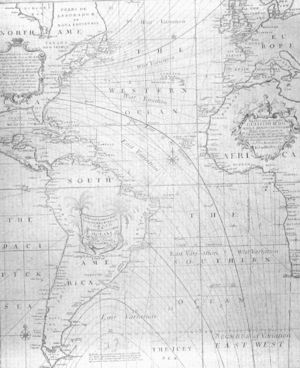 Halley's Isogonic Chart of the Atlantic

This article was initially published in Today's Engineer on June 2008

When one reads or hears the name Edmond Halley, the comet of the same name often comes to mind. Relatively rare, comets have appeared throughout history, and for millennia, humanity viewed comets as independent, if not prophetic, events. In 1682, another comet appeared to the world. Halley, one of the most eminent astronomers of the late 17th and early 18th centuries, argued that the comet of 1682 had been the same one that had been recorded in 1066, 1305, and 1380. Rather than on a parabolic trajectory, this comet, he argued, traveled on a highly elongated elliptical orbit. Using the new mathematics and physics developed by his friend Isaac Newton, Halley predicted that this comet would appear again to the world in 1758. Halley, who would become Britain’s Astronomer Royal, never lived to see his prediction come true. But Halley’s Comet was born. Not confined to only astronomy, Halley’s great mind touched many areas of science and technology. To electrical engineers, it may come as a surprise that Edmond Halley was also one of the early explorers into the realm of electromagnetic phenomena.

It was in the 13th century when the compass first appeared to Europeans, though in China it had come about two centuries earlier. As crude as these early compasses were, they marked a great technological revolution. One could argue that the compass was the first electromagnetic technology. For the first time, mariners had a tool for navigating on the undifferentiated ocean, regardless of the conditions. As explorers ventured further out into the world’s oceans, they discovered that the compass did not point to the geographic North. This difference between geographic North and magnetic north was called “variation.” Mariners were further perplexed by the ever changing value of the variation as one moved on the globe. The fact that the compass behaved oddly could be frightening to sailors setting out into the unknown. On his first journey in 1492, fearing a mutiny, Columbus kept the compass’s odd behavior a secret from his crew. Even more troubling was the observation that at a given point on the Earth, magnetic north would move about over time. During the 17th century, after the pioneering work of William Gilbert, it was understood that the earth itself was a giant magnetic dipole with which the compass interacted. But it was still a mystery as to why the compass did not point to North in the same way as one moved across the globe, particularly in an East-West direction.

Halley’s interest in magnetism went back to his days as a schoolboy at St. Paul’s. Born in London, in 1656, Edmond Halley was the eldest son of a prosperous merchant. Recognizing the potential in the precocious boy, Edmond’s father sent him to St. Paul’s for a good education. Halley excelled in his studies, which were made up of Classics, mathematics, and some astronomy and navigation. At the age of 16, while at St. Paul’s, the young Halley made his first measurement of the magnetic variation, which he included in a later publication years later. At the age of 17, he entered Queen’s College, Oxford, where his focus turned to astronomy. While at Oxford he published his first paper in the Philosophical Transactions, with John Flamsteed, who had been named England’s first Astronomer Royal. In 1676, at the age of 20, Halley dropped out from his studies at Oxford to undertake an expedition to the remote island of St. Helena’s in the South Atlantic. His goal was to create the first star catalogue of the Southern Hemisphere. The young Halley must have had good connections, because his proposed project reached the ear of Charles II. The king not only induced the East India Company to provide the transport for Halley, an assistant, and a considerable cargo of instruments to St. Helena; Charles II also ordered the Governor of the island to offer him any assistance needed. Upon his return from St. Helena, Oxford University -- in an unprecedented gesture-- with the prodding of King Charles II, granted Halley his M.A., without having to satisfy the usual residency requirements or having taken any final examinations. In the years to follow, Halley would return to the study of terrestrial magnetism and compass variation.

Until the experimental work of Hans Ørsted, Michael Faraday, and James Maxwell’s brilliant theoretical synthesis, scientists viewed electricity and magnetism effects as separate and independent phenomena. Of the two, magnetism had received the earliest and most intense scrutiny, from both scientific and technological perspectives. The imperatives of maritime trade and naval power drove the intense interest in magnetic phenomena. The study of terrestrial magnetism then opened the door to the science and technology of electromagnetic phenomena that would follow in the next two centuries. Halley devoted much of his time to modeling and mapping the behavior of the earth’s magnetic field. His grand ambition was to solve the age old longitude problem through a better understanding of the Earth’s magnetic field.

In 1683, Halley produced the first of many papers on the Earth’s magnetic field. In 1696, he argued that the Earth was made of an outer shell and a separate inner core. Each produced its own magnetic dipole. It was the motion of the inner core that produced the observed behavior of terrestrial magnetism. Although Halley’s model was eventually proven wrong, his belief that the behavior of the planet’s magnetic field had its origins deep in the Earth core does resonate with the explanations that emerged in the 1950s. The core is molten and in motion. Complex magneto-hydrodynamic processes deep within the earth, which are still not fully understood, create the behavior of the magnetic field observed on the Earth’s surface and above. More important to the science of terrestrial magnetism was Halley’s extensive work to map the variations.

For Halley, the behavior of the variations held the key to solving another great problem in nautical navigation, the determination of longitude. Despite its crucial importance, the practical determination of longitude at sea had long eluded the best minds. Latitude was fairly easy to determine. But without accurate longitude, one could never be sure where one was on the ocean. Errors in longitude led to considerable loss of life and ships. The maritime nation that could master longitude could more easily consolidate its command of the sea. The governments of all the maritime powers offered substantial prizes to anyone who could solve the longitude problem. In addition to money, the solution of longitude also promised great honor and prestige. Halley was convinced that the east-west changes in variation could be closely tied to changes in longitude. The idea was not new. It had been proposed several times during the course of the 17th century.

Halley’s great contribution was the invention of the isogonic map. He set out to map the lines of constant variation over the Earth’s surface. The hope was that lines of constant variation could somehow be translated in a one-to-one manner to longitude. In 1693, with the full support of the Royal Society, Halley proposed to the government that it fund a voyage around the world in order to measure and map the phenomenon of variation as away of determining longitude. Queen Mary II approved all of elements in Halley’s petition. The outbreak of hostilities with France delayed Halley’s expedition. Finally, in 1698, set sail on the Paramore, on a 52 ft vessel built for the expedition. The Admiralty had reduced the geographic range of Halley’s investigation to the North and South Atlantic.

Halley’s only experience at sea had been as a passenger. And yet, in an astonishing move, the Royal Navy gave Halley command of the Paramore. Halley returned to England within a year. Shortly after his return, Halley set out on a second expedition to measure the magnetic variation. Halley’s charting took him within 200 miles of the Antarctic. In 1701, based on all the data gathered, Halley produced the world’s first isogonic chart of the North and South Atlantic Oceans. Throughout the first half of the 18th century, Halley continued to seek the solution to the longitude problem through magnetism. Efforts to use magnetic variation to solve the longitude problem stopped when reliable and accurate marine chronometers appeared toward the end of the 18th century. Nevertheless his chart was a great scientific achievement. To this day it is still used as a reference datum when geophysicists want to validate their magneto-hydrodynamic models of the Earth’s core.

A renowned astronomer, he became England’s second Astronomer Royal in 1720. He was actively involved in the development of diving bell technology. He developed predictive models of the tides. He did important work in meteorology. To Halley, we owe Isaac Newton’s groundbreaking work the Principia. Halley encouraged Newton to organize and publish his ideas. When the Royal Society found itself unable to fund the publication of the Principia, Halley, at his own financial risk, put up the money. Halley and Newton remained lifelong friends. Halley’s achievements were indeed many. But to paraphrase one Halley biographer, while Newton was the man of gravity, Halley was the man of magnetism.