This article is intended to provide a valuable input to the TAB/SSIT Task Force, set up to look into IEEE’s involvement in ethics and gaps which may exist and need to be fixed (1). In this article, I cite essays of law (2,3)written by Dr. Ronald B. Standler, attorney in Massachusetts and consultant and Senior Member of IEEE, now retired (4), which provide an excellent detailed basis of understanding of how most engineers are employed; mostly with little or no protections to practice ethically. His essays explain an important part of the law, under which many of IEEE Members are employed under the “at-will employment doctrine” and wrongful discharge. Under this law, an employee may be terminated/fired for any reason, just or unjust, moral or immoral, ever since the late 19 th century in the USA. The at-will law in its rawest form provides little or no protection to the employed engineer, but a new concept, the “public policy exception to the rule”, is beginning to provide some areas of relief. In this article, it is shown how IEEE in the BART case (5) took advantage of this public policy exception and in doing so established a potential landmark basis for future IEEE support of ethical engineers threatened or terminated from their employment under the at-will law. This will provide to the Task Force accerss to the needed legal understanding to better comprehend the ethical and employment dilemma faced by IEEE Members when they are employees of and practice through an organization under the at-will law.

B. Background of the Problem and Biggest IEEE Ethics Gap[edit | edit source]

An important fact which the Task Force should take into consideration is how vulnerable an ethical IEEE engineer is when engaged under this at-will law in the USA, and possibly in other areas of the world yet to be fully understood, when engaged as an employee without the protection of a written contract. Under this legal doctrine, an employee can be terminated for any reason, just or unjust. And because of that, IEEE employed engineers need to have access to IEEE’s ethics advice and ethical support so they can get up to date information and advice to assist them in resolving their dilemma satisfactorily. IEEE Members may be employed in the USA as either “at-will” or “just-cause” employees. In “at-will”, the employee may be terminated for any reason, being just or not just, whereas in “just-cause” there must be a legitimate reason, generally spelled out in a employment contract, to terminate. Today, and since 2000, however, they are denied both ethics advice and ethical support( 6, 7, 8) under today’s restrictions in 1.3 and 1.4 of the Ethics and Member Conduct Committee’s Operations Manual, (9). This dilemma is therefore seen as the main ethics gap for the Task Force to deal with. However, on a brighter light, I have shown in (10) how it was possible to achieve a positive outcome in one employee- employer ethics dispute, which I called a WIN-WIN outcome. There, ethics advice and ethical support were able to be applied internally in the place of employment under the at-will law, and an accommodation was reached with Management, which enabled achieving this outcome. Hopefully, IEEE will see fit to restore ethics advice and ethical support to provide an external source of assistance in future employee-employer disputes. This at-will doctrine is attributed to Horace C. Wood, who in 1877 wrote in his work “Master and Servant” this doctrine as he saw the employment relationship at that time. An added view of this is that the employment may be terminated at-will by either party; either employer or employee. It seems that the USA is one of the only countries in the industrialized world with this at-will lack of employment protection to the employee.

The above at-will explanations illustrate the law under which many IEEE Member employees work. They have no written employment contract and can be terminated at-will, for cause or no cause at all, Standler writes. We have seen this in these 3 IEEE supported cases: BART (11), Virginia Edgerton (12), and Salvador Castro (13). Each of these cases were brought to the IEEE after each had been terminated, investigated, and then later, ethical support provided. Following this, each was recognized for their service to the public and became a recipient of the IEEE/SSIT Barus Award (14). 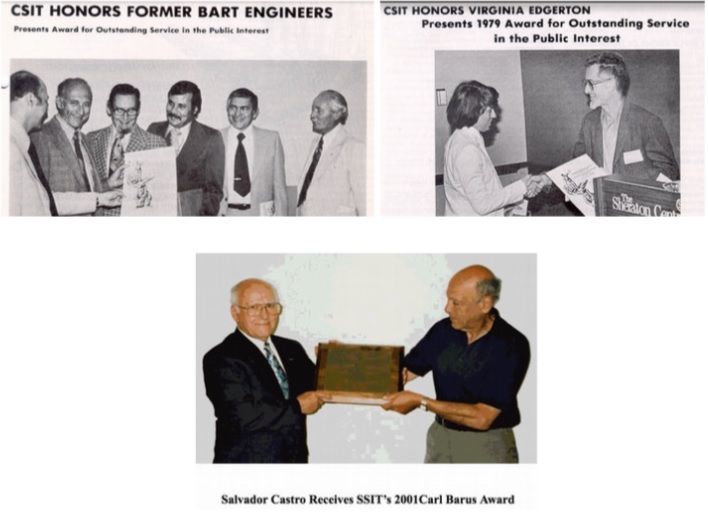 In Standler’s At-Will essay (2), there is discussed how an exception to the at-will rule came about. It is called the “public policy exception” to the at-will employment rule. This was a ruling handed down by the California District Court of Appeal in 1959, referred to as Petermann v. International Brotherhood of Teamsters. It said that an at-will employee who is asked to commit perjury by his employer, but refuses to, cannot be terminated under the at-will law. Then later in 1980 the California Supreme Court accepted the Petermann reasoning, followed the same year by a landmark ruling written by the New Jersey Supreme Court. These are discussed in Standler’s ”Professional Ethics and Wrongful Discharge” (3). Following these 2 rulings, other states began to recognize the public policy exception to the at-will rule. In essence, Public Policy means that one cannot do lawfully what is harmful to the public, or public good and in the IEEE BART Case Amicus Curiae it argued that because of the public policy exception to the at-will rule, there is an implied term in the BART engineers unwritten contract, which can not be violated.

E. IEEE’s Amicus Curiae in the BART Case Was Based on This Public Policy Exception to the At-Will Rule[edit | edit source]

In the BART case, where the IEEE in 1975 entered its landmark Amicus Curiae brief (15) in the case, it stated the following, citing this public policy exception to the at-will employment law:

A detailed report was published about the whole BART case, titled “Divided Loyalties”(16). It discussed what happened at BART, the safety issues raised by the 3 BART engineers, their firing, the subsequent investigations, the articles published by the IEEE Spectrum magazine, Steve Unger’s and the Committee on the Social Implications of Technology, CSIT, investigations and its urging via TAB for the IEEE to enter the BART case, the ExCom and Board approval to enter, and the subsequent Amicus Curiae legal brief of IEEE, which was entered in the case in January 1975. Contained in Divided Loyalties are these 2 significant writings. The first highlighted what IEEE’s legal team viewed as the most important part of its brief: 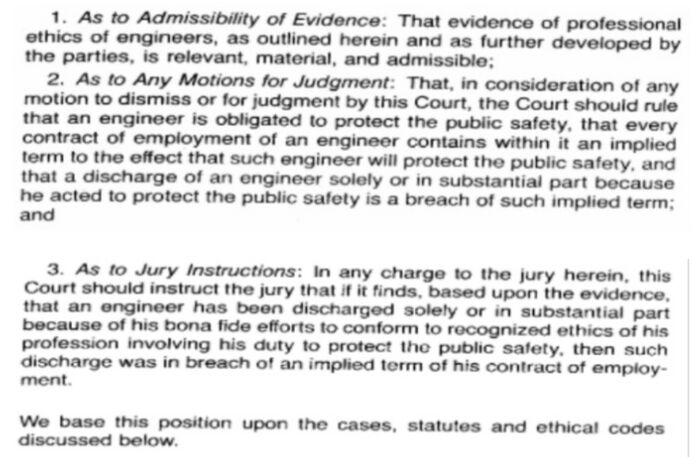 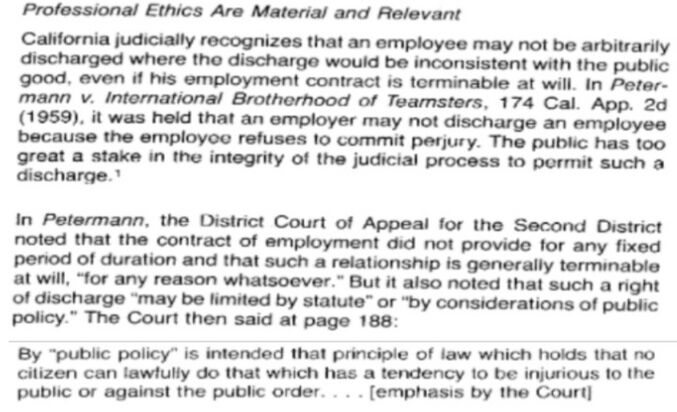 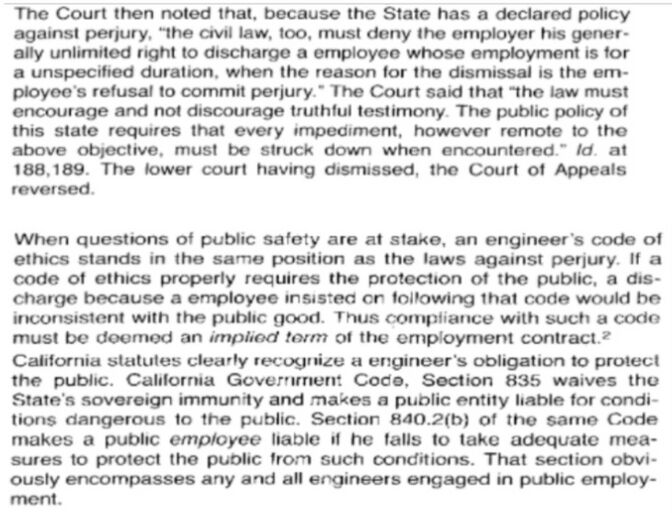 The Potential Impact of the IEEE Amicus Curiae BART Case Brief Argument A detailed report was published about the whole BART case, titled “Divided Loyalties”(16). It discussed what happened at BART, the safety issues raised by the 3 BART engineers, their firing, the subsequent investigations, the articles published by the IEEE Spectrum magazine, Steve Unger’s and the Committee on the Social Implications of Technology, CSIT, investigations and its urging via TAB for the IEEE to enter the BART case, the ExCom and Board

approval to enter, and the subsequent Amicus Curiae legal brief of IEEE, which was entered in the case in January 1975. Contained in Divided Loyalties are these 2 significant writings. The first highlighted what IEEE’s legal team viewed as the most important part of its brief: 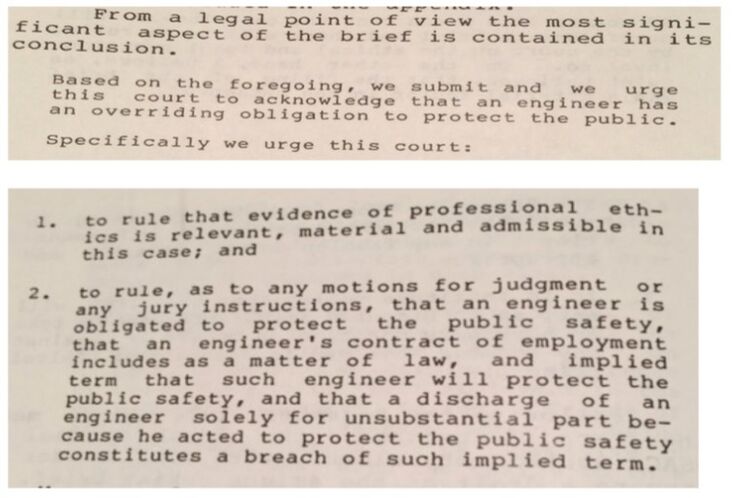 and then, Steve Unger and CSIT (17) developed the view that IEEE needed to provide ethical support to its Members, by adopting the following resolution: 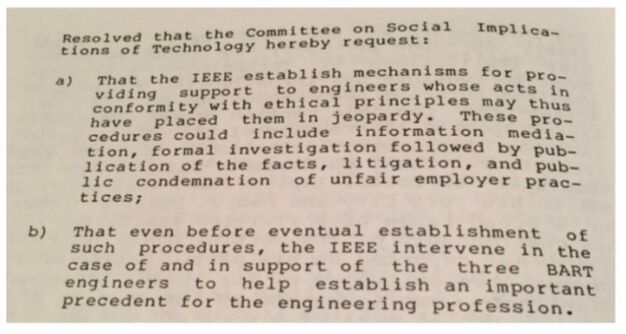 Out of these, by 1978, was created the Member Conduct Committee with its dual purpose to 1. Discipline Members and 2. To Render Ethical Support. These dual purposes were implemented successfully for the next 20 years, until beginning in 1998, all ethical advice and support services were terminated by IEEE’s Ex Com and Board of Directors (18). But, today, the EMCC is prohibited from rendering both ethics advice and ethical support to its Members. These restrictions are contained in 1.3 and 1.4 of the EMCC Operations Manual, shown below. My POSITION STATEMENT document (6) shows how and where these violate IEEE Governance Documents and the New York Not for Profit Corporate Law governing Directors duties to their Members.

I suggest for the TAB/SSIT Task Force to take the 6 points discussed in Standler’s Conclusion (2) and apply them to what IEEE Member employees face working for an employer who would willingly intimidate, threaten, punish or worse terminate an ethical engineer, when suggesting remedies to TAB, as its work progresses. Additionally, here are my suggestions for additional considerations the Task Force may consider recommending also to TAB:

a) A Moderated Ethics HOT Line,

b) An Ethics Legal Support Fund,

2. Amend the IEEE Constitution and add these into it as it gives the Members protective control, not the Board, as the Board can Amend if placed in the ByLaws Specific Elements of the Sloan Ethics Conflict Resolution Service, the ECRS (19)

1. Provide Education to the Members

3. Hold Face-to-Face Meetings with Those Charging or Asking for Help

8. Membership in and Assistance from the Ethics Officers Association

Because most IEEE Members are employed under the at-will employment doctrine, they are at risk of either being reprimanded or worse being terminated without recourse, when they raise an ethical principle with their employer and then are placed in jeopardy for doing so. A legal ray of hope, however was developed, in the Petermann ruling, where it argued that there is a Public Policy exception to the at-will rule. IEEE in the BART case used this to argue that an engineer had an implied term in its employment wherein they are legally obligated to protect the public in accordance with their Code of Ethics. Given these facts, the TAB/SSIT Task Force should develop findings leading to the restoration of the IEEE EMCC being charged with rendering full ethics advice and ethical support to Members in need.

7. Elden, Walter L. “An Input to the SSIT Task Force To Restore IEEE Ethics Advice and Support to its Members” http://ethw.org/images/3/32/An_Input_to_the_Task_Force_Looking_i nto_IEEE_Ethics_and_Gaps_Therein.pdf

Retrieved from "https://ethw.org/w/index.php?title=First-HandːWhy_IEEE_Members_Need_Ethics_Advice_and_Ethical_Support-Walter_Elden&oldid=196429"
Categories:
This page was last edited on 17 November 2022, at 20:40.
About ETHW
Policies and disclaimers