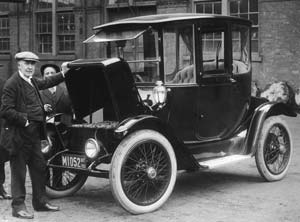 As with several of Thomas Edison’s later projects, such as his effort to mine iron ore and his quest to create synthetic rubber, his attempts at improving the battery did not lead to the results he hoped for. Edison started his work on the battery in the 1890s, just after the automobile had been introduced. At that time, the gasoline automobile was still unreliable, and steam and electric cars sold in larger numbers. One problem with electric cars, however, was that the lead-acid batteries that they used (similar to the batteries used to start gasoline-powered cars today) were extremely heavy. Another was that the acid corroded the lead inside the battery, shortening the useful life of the battery.

Edison began looking for a way to make batteries lighter, more reliable, and at least three times more powerful so that they could become the basis of a successful electric car. Edison and his team conducted tests of all sorts of metals and other materials, looking for those that would work best in batteries. The tests numbered in the thousands and lasted until 1903, when he finally declared his battery finished. The battery used potassium hydroxide, which reacted with the battery’s iron and nickel electrodes to create a battery with a strong output that was reliable and rechargeable.

As usual, Edison announced the new battery with great fanfare and made bold claims about its performance. Manufacturers and users of electric vehicles, which now included many urban delivery and transport trucks, began buying them. Then stories about battery failures started coming out. Many of the batteries began to leak, and others lost much of their power after a short while. The new nickel-graphite conductors were failing. Engineers who tested the batteries found that while lightweight, the new alkaline battery did not significantly out-perform an ordinary lead-acid battery.

Edison shut down the factory immediately, and between 1905 and 1908, the whole battery was redesigned. Edison came up with a new design, and although the new battery used more expensive materials, it had better performance and more power. By 1910, battery production was again underway at a new factory near the West Orange, NJ laboratory.

However, it was too late for the electric automobile. Edison’s friend Henry Ford had introduced the lightweight, inexpensive Model T car in 1909, which helped make the gasoline engine the standard for the automobile. The largest remaining market for the batteries was in special commercial vehicles, such as the small trucks and cars used in cities for deliveries, or inside factories to move materials around. Even here, however, Edison’s battery was somewhat less powerful than conventional lead-acid batteries. Around 1912, gasoline automobiles would actually begin to use batteries to run their starters, but Edison’s battery was not suitable for this use because its voltage was too low. Its best feature was its reliability, which made it popular in other applications such as providing backup power for railroad crossing signals, or to provide power for the lamps used in mines. While it did not fulfill Edison’s dream of powering the automobile, at least it was profitable, and it became one of his biggest moneymakers in later years.

Retrieved from "https://ethw.org/w/index.php?title=Edison%27s_Alkaline_Battery&oldid=108826"
Categories:
This page was last edited on 25 November 2014, at 15:24.
About ETHW
Policies and disclaimers