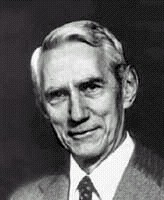 Claude Elwood Shannon’s realization that all information could be transmitted in a series of 1s and 0s laid the foundation for a revolution in the spread of information. He developed the mathematical theories and techniques that make possible the analysis of switching circuits, computers and communications.

Shannon was born 30 April 1916, in Petoskey, Michigan, but grew up in Gaylord, Michigan, where he worked as a Western Union messenger boy while in high school, an educational step he took in three years. At the University of Michigan, he did work in both electrical engineering and mathematics and received bachelor of science degrees in both fields in 1936. During summers while in college, he repaired radio sets in a Gaylord department store. At school, he joined the Army Signal Corps Reserve Officers Training Corps and soon found himself busy developing new Army instruments, including a modulation meter, a code speed meter, and networks having any desired frequency-impedance characteristic. When he was graduated, however, he was not yet 21 and had to wait to receive his Signal Corps reserve officer commission.

The years 1936 to 1940 Shannon spent at M.I.T., where, among other activities, he worked as a research assistant in the Department of Electrical Engineering in charge of operating the Bush mechanical differential analyzer, the precursor of modern analogue computers. In 1940, Shannon took his S.M. degree in electrical engineering and his Ph.D. degree in mathematics, both from M.I.T., both simultaneously again. In a master’s thesis which has proven critically important, he demonstrated that Boolean logic could be worked with electrical switching circuits. This thesis was meant to help the telephone industry move from human operators to complex switching circuits. However, the theory it expressed has been foundational to modern computing.

After receiving his Ph.D., he spent the next year at the Institute for Advanced Study at Princeton, then joined Bell Telephone Laboratories at Murray Hill, New Jersey, in what became a most fruitful and dynamic association. While he was often solitary in performing his own work, he was an invaluable help to colleagues when they faced challenges. He remained at Murray Hill until 1956 when he returned to M.I.T., first as visiting professor and, a year later, as professor of communications science. He was a member of both the Department of Mathematics and the Department of Electrical Engineering.

His most significant piece of work was "A Mathematical Theory of Communication," published in two parts in the Bell System Technical Journal in 1947-48. With this paper, Shannon laid down the theoretical foundation for communications engineering-a kind of "thermodynamics of communications" which, up to that time had been missing. In opening a new mathematical field for engineering applications, Shannon's work compares only to that of Norbert Wiener in the theory of time series and to that of Von Neumann and Morgenstern in the theory of games. Of equal importance was the impact of Shannon's definitions, his model of the communications process and his theory on scientists and engineers concerned with human communications. He was a principle pioneer in information theory and deserves much of the credit for the digital communication which is fundamentally important in our information age.

This mathematical theorist also found joy in creating mechanical automata. "I've always pursued my interests without much regard for financial value or value to the world," Shannon once told the IEEE Spectrum. "I've spent lots of time on totally useless things." His rambling home overlooking Mystic Lakes in Winchester, Massachusetts, abounded with the products of his gadgeteering, to the delight of young and old alike. In the living room was a player piano "programmed" with randomly-cut music and supervised by a fully-clothed department store mannequin. Also there was the "mouse that learns," a mechanical creature that, with the aid of a small computer, could find its way through a maze to a brass cheese. Outside were a host of mechanical devices, gadgets and conveyances, including a camping bus, a complete bicycle shop, and a chair lift to carry visitors from the house down a steep embankment to the edge of the lake.

Shannon was married to Mary Elizabeth Moore Shannon. The couple had three children, two sons and a daughter. Shannon passed away on 24 February 2001, after a struggle with Alzheimer’s disease, not fully aware how far his work had been taken.

He received the IEEE Medal of Honor in 1966, "For his development of a mathematical theory of communication which unified and significantly advanced the state of the art."

Retrieved from "https://ethw.org/w/index.php?title=Claude_Shannon&oldid=147270"
Categories:
This page was last edited on 29 February 2016, at 20:18.
About ETHW
Policies and disclaimers