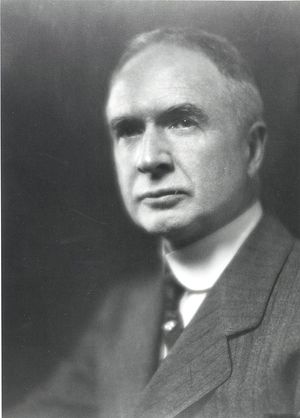 Calvert Townley, AIEE President, 1919 - 1920, an electrical engineer who worked on the installation and equipment maintenance of transit systems in the Northeast. Two of his most notable projects were working with electrical equipment in Boston’s South Terminal and the electrification of railroad lines leaving New York City.

AN UNUSUAL combination of engineering skill and managerial ability from the commercial standpoint made Calvert Townley one of the most conspicuous engineers in the railroad and utilities fields. He was a capable technical adviser, executive, and a very able engineer in the practical work of design, construction and equipment.

He was born in Cincinnati, Ohio, October 18, 1864, and was graduated from the Sheffield Scientific School of Yale with the degree Ph.B. in 1886 and M.E. in 1888. For a short time Mr. Townley worked on the rebuilding of the central lighting station of the Brush Electric Company of Cincinnati. During most of the period from 1887 to the time of his retirement in 1931, he was connected with the Westinghouse interests in various positions. He was erecting engineer in office charge of the design of electric lighting distribution systems (1887), commercial executive (1888-95), manager for the Boston branch (1895--97; 1898-1900) and also associated with the Pittsburgh group of engineers in installation and equipment work throughout the New England states. During this period he was connected with the electrical equipment of the South Terminal of Boston and of the elevated railway system, and the installation of the polyphase transmission system and city lighting system of the Hartford Electric Light Company. He was general agent for the Westinghouse interests in New York (1901-04) in charge of large transportation interests in and about the city; he was concerned with the equipment of the Brooklyn Rapid Transit, Interborough Rapid Transit, and New York City railway systems.

From 1904 to 1911 he was associated with the New York, New Haven, and Hartford Railroad, in various executive capacities and as technical adviser. One of the important projects upon which he worked in both capacities was the electrification of the railroad's lines out of New York City. About this time the company began acquiring utility companies and Mr. Townley was appointed first vice-president of the holding company to manage their utilities as a side issue. The "side issue" reached such magnitude that after completing electrification plans and drawing specifications, Mr. Townley asked to be relieved of construction duties and became consulting engineer for the railroad in the management of utilities.

He returned to the Westinghouse Company in 1911 as assistant to the president, remaining in that position until 1931 when he retired. He died on November 27, 1933. He was also president of the Lackawanna and Wyoming Valley railroads, vice-president of the International Radio Telegraph Company and an officer and director of many other organizations. He was an active participant in Institute affairs, serving as manager (1905-8) and vice-president (1908-10) and as committeeman at various times.

Retrieved from "https://ethw.org/w/index.php?title=Calvert_Townley&oldid=145418"
Categories:
This page was last edited on 19 January 2016, at 20:18.
About ETHW
Policies and disclaimers