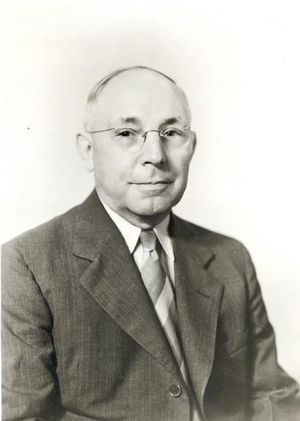 Blake D. Hull (A'15, M '26, F '39) chief engineer, Southwestern Bell Telephone Company, St. Louis, Mo., was AIEE president from 1947 to 1948. He was born September 12, 1882, in Galesburg, Mich., and was graduated from the University of Kansas in 1905. He immediately became assistant construction engineer for the Missouri and Kansas Telephone Company, Kansas City, Mo., and in 1910 was appointed transmission and protection engineer.

When the company was absorbed by the newly formed Southwestern Bell Telephone Company in 1912, Mr. Hull was translerred to St. Louis and made general transmission and protection engineer for the entire area of the new company. He was named general building and equipment engineer in 1925 and area engineer for Texas in 1926. In 1936 he was appointed chief engineer for the company. Mr. Hull retired from active service in October 1947.

During World War II Mr. Hull was with the Construction Section of the Office of Production Management for more than a year and subsequently served for a year as consultant for "the Defense Plant Corporation. Mr. Hull's AIEE activities have been numerous. He was chairman of the St. Louis Section for 1925-26 and served as director of the Institute from 1931 to 1935. He was vice-president for the South West District from 1928 to 1930. While in that office he was instrumental in the establishment of Sections in Dallas, Houston, and San Antonio, Tex.; and in the reorganization of the Oklahoma Section as the Oklahoma City Section. In 1944 he was general chairman of the summer meeting committee and has served on the following AIEE committees: communication, nominating, Institute policy, and transfers. He was a member of the committee on transfers and the subcommittee on professional development and a member of the Engineers Club of St. Louis.

Retrieved from "https://ethw.org/w/index.php?title=Blake_Hull&oldid=145384"
Categories:
This page was last edited on 19 January 2016, at 17:11.
About ETHW
Policies and disclaimers