Women, Unions, and the Electrical Industries 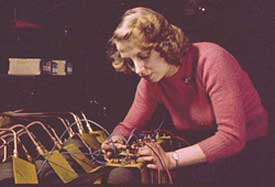 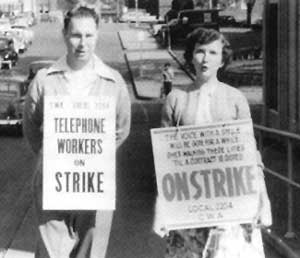 For hundreds of years, laborers and craftspeople have banded together to form craft guilds or labor unions. These organizations helped protect the interests of workers from unscrupulous employers. They often performed other functions, such as providing training and pension and health plans. This helped ensure a modicum of security in case a member lost his job. Beginning in the 1880s an increasing number of workers, seeing the benefits of banding together, began to unionize. This was often a process fraught with conflict and even violence. Despite the struggles, by the 20th century, workers in many industries were unionized, and union leaders negotiated with employers for improved wages and working conditions.

The emergence of the electrical manufacturing industries during and after the 1880s coincided with a surge of union activity in the United States. Unfortunately, the benefits of union membership were rarely offered to the lowest-paid workers. At the time minority groups such as women, African-Americans, and Asian-Americans, were usually low-wage workers, and thus were not protected by unions. As a result, some of these groups formed their own organizations. For women in the electrical industry this meant either creating their own unions or organizing women’s branches of existing men’s unions.

The earliest women workers in the electrical industry to unionize were telephone operators. Leaders such as Julia O’Connor, who worked in Boston beginning in the late 1890s, helped organize unions that tried to improve working conditions for operators. Because the telephone system grew so large, tens of thousands of women operators were employed to run it. As a result of their large numbers, the operator’s union became one of the most important of the women’s unions.

Through union negotiation, telephone operators helped shape the emerging telephone network, by regulating how it was run and who ran it. There were major downsides, however. One of the long-term outcomes of unionized telephone operators was pitting the telephone companies against their own workers. The major telephone company in the U.S., American Telephone and Telegraph (AT&T), began to install automatic switching equipment across the country in the 1920s. While it was argued that automatic switching was necessary to handle the growing volume of calls, it was also true that the new technology replaced women operators with machines that did not demand raises or sick time, or go on strike. This “mechanization,” as it was called, had been going on in many industries for decades. It resulted in better telephone service, but had the effect of greatly diminishing job opportunities for operators.

A second major area where unions contributed to the development of the electrical industries was in the field of radio, television, and military electronics from about the 1920s to the present day. The radio industry, which barely existed in the early 1920s, became so large by the 1930s that new unions formed around it. One of the most important was the United Electrical and Radio Workers of America, formed in March, 1936 in Buffalo, New York. Like other unions, it was most effective when it called on its workers to strike to force employers to “play fair.” Its biggest strike was in 1936 at the RCA plant in Camden, New Jersey where workers complained that they were being paid less than workers in similar jobs located just across the river in Philadelphia. RCA president David Sarnoff refused to grant the raises, and sent hired thugs to attack the protesters. The thugs were then joined and aided by state and local police. Although many of the workers were women, they were beaten and many of them had to be hospitalized. Eventually, Sarnoff backed down and raised wages to comparable rates.

The significance of the electrical workers’ unions was to strike a balance between the power wielded by companies, who sought to maximize profits, and workers, who sought steady work and high wages. While corporate managers sometimes thought the unions were bent on ruining the companies, in fact the unions supported the idea of a growing and profitable industry. They merely sought to ensure that workers were treated well. As a low-wage minority group women were in even sorer need of that protection than white male workers.

Retrieved from "https://ethw.org/w/index.php?title=Women,_Unions,_and_the_Electrical_Industries&oldid=120388"
Categories:
This page was last edited on 28 September 2015, at 20:02.
About ETHW
Policies and disclaimers