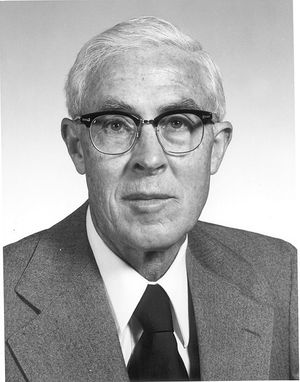 It is indeed fortunate that the presentation is being made at a meeting in Georgia where he started his career in electrical engineering and where Dr. Joseph Pettit, a long-time friend is now president of his Alma Mater. Georgia Tech.

Mr. Johnson's career has been dedicated to the expansion of high voltage transmission systems in the Western United States. During Mr. Johnson's 40 year distinguished career with Pacific Gas and Electric Company he undertook many important projects, retiring as the Chief Electrical Engineer in November of 1979.

Mr. Johnson has been a member of IEEE and its predecessor AIEE since 1937 and attained the grade of Fellow in 1959. He has, also been a member of CIGRE since 1960. He is well known to his peers in the Electric Utility Industry for his contributions to transmission systems. He has also written many technical papers and discussions.

Mr. Johnson's many interests include photography and back-packing in the Sierra Nevada mountains. He has been active in scouting for many years on committees and in the field leading Sierra hikes. His interest in music led to playing the clarinet. He has played in various local bands and orchestras, and he is currently playing in a symphanic band at the College of San Mateo. His wife, Barbara takes an active part in his activities. Mr. Johnson and his wife reside in San Mateo, California and they have 5 children and 6 grandchildren.

Retrieved from "https://ethw.org/w/index.php?title=William_R._Johnson&oldid=172006"
Categories:
This page was last edited on 20 December 2018, at 19:41.
About ETHW
Policies and disclaimers