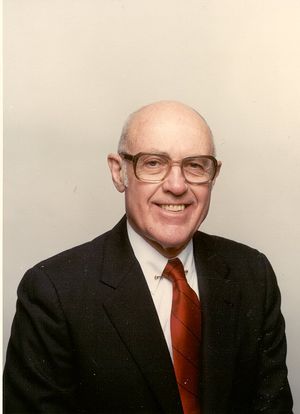 His lifelong fascination with radio started as a Cub Scout when he built a crystal set to fulfill one of the advancement requirements. This shaped his entire education, culminating in the Ph.D.E.E. degree in 1949 from Northwestern University, after two years in the Navy as a radar maintenance officer. His doctoral thesis was concerned with radiation from dielectric tube waveguides.

After graduation Bill joined the AT&T Bell Labs in Holmdel, New Jersey. He spent the next decade doing research on microwave antennas and propagation. He then enjoyed an exciting two years as Project Engineer designing and operating the Bell Labs station for participation in Project Echo, the first successful satellite communication experiment bouncing microwaves from coast to coast off an orbiting 100-foot diameter balloon.

Shortly afterwards Bill was promoted to Department Head at Bell Labs to "do something sensible about mobile radio," in the words of John R. Pierce of the Labs. This led to intensive studies of propagation, antennas, and systems to characterize and cope with the hostile mobile radio environment. Many important discoveries and contributions were made by Bill and his people over the next eight years, most of which are described in their book "Microwave Mobile Communications," published in 1974. The cellular concept, invented earlier, was extensively analyzed and many important parameters and their inter-relationships were established. All of this work helped to lay down the basic physical and system principles which make possible the present cellular systems.

Besides a lifelong dedication to the communication sciences, Bill has an interest almost as strong in music. He is an accomplished clarinetist, having played in a number of community symphony orchestras at various times, and also had his own "big band" in high school and college. He has been an avid downhill skier for over thirty years and enjoys an occasional brisk game of tennis. At home in Massachusetts he lives with his wife Mary whom he married while in graduate school. Their son Bob lives with his wife in Arizona, and their daughter Elizabeth lives and works in Massachusetts.

Dr. Jakes is co-recipient of the 1987 IEEE Alexander Graham Bell Medal, along with Richard H. Frenkiel and Joel Engel, "For fundamental contributions to the theory, design and deployment of cellular mobile communications systems."