This update highlights IEEE’S historical practice that for over the past 22 years its EMCC has denied providing ethics advice and ethical support to its members. If it was legal doing so, then what changes are needed to restore both services, as they were provided during the MCC’S first 20 years, as was demonstrated in the Virginia Edgerton case in 1978 and the Salvador Castro case in the mid '90's? Further, what changes or improvements can be considered for improving the services the Ethics and Member Conduct Committee, EMCC, was created to its members? These will be explored to find both their historical record and opportunities to make improvements into the future.

The first material to be presented are the collection of policy items comprising the top-down collection of statements which collectively govern how IEEE administers its Member Discipline, Ethics Advice and Ethical Support services to the members. It is from one or more of these materials where IEEE gets its authority in these matters.

First-Hand: What I Learned Updating Part 2 of the IEEE ETHICS HISTORY REPOSITORY, IEHR. This contains the Editorial Audios moved from this Part 2, to a more appropriate place, its own First-Hand web page.[edit | edit source]

The headline item stresses that a contract agreement is created when members join or re-join, agree to abide by the IEEE CODE OF ETHICS, and in return under Canon 10, the IEEE agrees to support members to practice ethically.

The update stresses cases handled secretly over the past 42 years and highlights the BARUS awards issued by the SSIT to individuals for “Outstanding Service in the Public Interest”, supporting IEEE’s Tag Line, ADVANCING TECHNOLOGY FOR HUMANITY.

b.   Restrictions in EMCC Operational Manual prohibiting ethics advice and support are invalid

c.    IEEE Members should be treated as engineer professionals, not as employed workers

e.    The SSIT, through its BARUS awards, has supported more members than the MCC/EMCC have

g.   EMCC to be de-centralized into the Regions

h.   EMCC reports to be more frequent and made public to members

i.      SSIT should perform a Watchdog function on the EMCC

j.      Ethics HOTLINE should be re-activated

k.    Board and Committee work to be made public to members

"To the fullest extent possible, it is my intent to use IEEE approved policy statement first, to update the IEHR's Part 2. Where this material is not possible to be obtained or approved for use, as some Board/ExCom decisions made may still be considered IEEE PROPRIETARY, in these circumstances, material from 1st and 2nd hand witnesses and/or published papers will be relied upon instead." 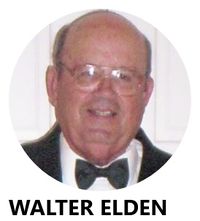 ABOUT THE EDITORː[edit | edit source]

DEDICATED TO ENGINEERING PROFESSIONALISM FOR THE PAST 50 YEARS, DRIVEN BY THIS EXPERIENCEː[edit | edit source] 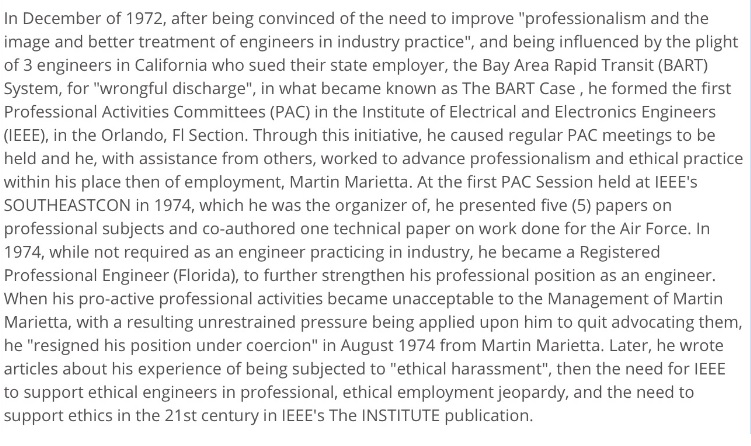 Retrieved from "https://ethw.org/w/index.php?title=Updating_of_the_IEEE_Ethics_History_Repository,_IEHR_Part_2-INTRODUCTION&oldid=181873"
Categories:
This page was last edited on 18 October 2020, at 18:57.
About ETHW
Policies and disclaimers