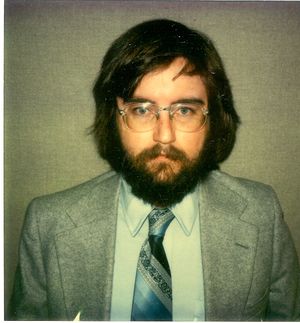 Timothy C. May was born December 21, 1951 in Bethesda, Maryland and grew up in California, Virginia, and France. His interest in physics began early and he participated in science fairs and the Science Talent Search in high school. He received a Regents Scholarship to attend the College of Creative Studies at the University of California in Santa Barbara, where he received a bachelors degree in physics in 1974. He joined Intel Corporation that year, intending to try solid state physics for awhile before continuing in astrophysics he has remained at Intel ever since. He was a Staff Engineer in the Memory Products Division in Aloha, Oregon.

From 1974 to 1976 he was involved in reliability physics studies of MOS chips, especially problems related to the high-temperature glass-sealing of NMOS RAMs. In February 1977 he discovered that trace amounts of radioactive elements in device packages caused random, single-bit "soft errors." He then determined that the upset mechanism was the passage of alpha particles through memory storage nodes. Since 1977 he has researched various aspects of this phenomenon, including materials analysis, charge collection studies, and cosmic ray studies.

Tim, a member of IEEE and the American Physical Society, has had published a number of papers and has received Best Paper and Outstanding Paper awards for papers he co-authored at the 1978 and 1979 International Reliability Physics Symposiums, respectively. He also shares a device patent on the use of semiconductor potential barriers to reduce soft error rates.

Retrieved from "https://ethw.org/w/index.php?title=Timothy_C._May&oldid=174036"
Categories:
This page was last edited on 19 February 2019, at 19:05.
About ETHW
Policies and disclaimers