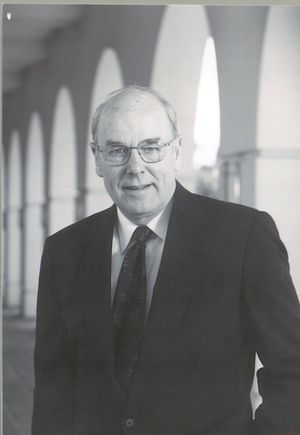 Thomas E. Everhart: From his early research at Cambridge University in England and in the 1950s forward, Dr. Thomas E. Everhart has developed indispensable tools for the electronics industry-scanning electron microscopes and electron-beam microwriters. This type of equipment is used for research on semiconductors, integrated circuits, microfabrication and more.

Under his direction, the University of California at Berkeley (UCB) saw the construction of the first scanning electron microscope in a U.S. university. At UCB, from 1958-1978, his work generated a network of students who now include many of the researchers and developers of electron beam equipment used in the semiconductor industry. His service as dean of the College of Engineering at Cornell University in Ithaca, N.Y., as chancellor of the University of Illinois at Urbana-Champaign, and as president of the California Institute of Technology at Pasadena (Caltech) are among his contributions to knowledge and his service to academia.

Currently president emeritus of Caltech, he has served until this year on the Boards of Directors of General Motors, Reveo, Saint-Gobain, Raytheon, Hughes Electronics and Agilent Technologies. He also has been a member of or chaired numerous committees of U.S. national importance, including ones in the National Academy of Engineering and the Department of Energy. He also served as vice-chairman of the U.S. Council on Competitiveness.

Dr. Everhart is a Fellow of the IEEE, American Association of the Advancement of Science and the American Academy of Arts and Sciences, and a foreign member of The Royal Academy of Engineering (Great Britain). He is the recipient of many honors, including an IEEE Centennial Medal.

Dr. Everhart was awarded the 2002 IEEE Founders Medal "For contributions in scanning electron microscopy and for leadership in academia, service to engineering organizations and advisor to the nation and industry."

Retrieved from "https://ethw.org/w/index.php?title=Thomas_E._Everhart&oldid=147244"
Categories:
This page was last edited on 29 February 2016, at 18:41.
About ETHW
Policies and disclaimers