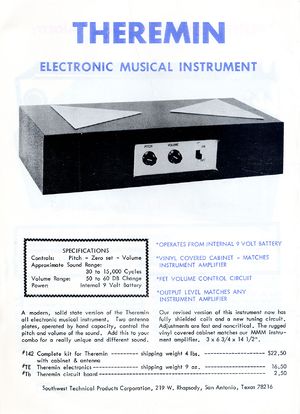 Advertisement for a Theremin appearing in Southwest Technical Products Corporation catalog circa 1969. 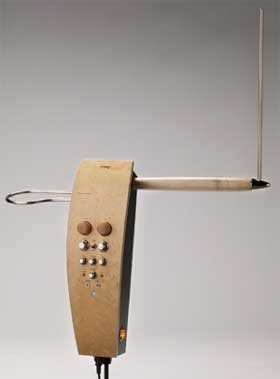 If you’ve ever watched a 1950s horror movie you’ve probably heard the unearthly and eerie sound of the Theremin. Named after its inventor, Leon Theremin, (born Lev Termen) the Theremin was one of the first—and is among the most famous—electronic musical instruments.

As a boy in Russia, Theremin had an interest in both music and electricity, the latter of which escalated with the advent of radio broadcasting. In 1917, while still a student, Theremin imagined a new musical instrument, one that would use radio technology to interact with the human body itself to produce an infinitely variable range of tones. He adapted an electronic “oscillator,” a circuit based on one or more electron tubes, which produces electromagnetic waves over a wide range of frequencies. Ordinarily, an oscillator is adjusted or “tuned” with a knob or lever, attached to a variable capacitor. In Theremin’s circuit, that variable device was the human body itself. By holding his hands near the instrument’s antenna, he could increase the capacitance of the circuit; by moving his hand farther away, the capacitance was decreased. Then the output of the oscillator circuit was simply attached to a loudspeaker, so that the frequency of the oscillations could be heard.

Theremin called his device the Etherphone, and patented it in 1921. It was demonstrated with great fanfare, first in the Soviet Union and later across Europe and in the United States. Watching someone play the Theremin was a sight to behold. The device was hidden inside a wooden podium, except for two metal antennas that stuck out. The musician, standing close to the podium, would simply wave his or her hands in the air near the antennae; one controlled the volume and the other controlled the pitch. It looked deceptively easy—few actually managed to master the instrument. Those who could, such as celebrated Thereminist Clara Rockmore, could produce beautiful, unearthly music that often sounded like a human voice.

Theremin stopped performing around 1938, and while a few devoted players continued to give concerts to delighted audiences through the 1940s, they were not very successful in elevating the status of Theremin music from oddity to respectability. Further, those who wanted to learn the Theremin found few teachers, little published music, and almost no Theremins for sale. Virtually the only Theremin in regular production at that time was made by the RCA Corporation, which made perhaps 500 of them in the 1930s.

The use of the instrument languished until the 1950s, when it began to be used to create spooky effects for the soundtracks of innumerable Hollywood science fiction and horror movies. This resurgence continued into the 1960s, when rock and pop music groups rediscovered the instrument. The Theremin was also an early product of electronic synthesizer pioneer Robert Moog, who got his start in electronic instruments by designing a transistorized Theremin in the 1960s.

The Theremin seems to go in and out of fashion as new generations discover this strange instrument. When, in 1995, Leon Theremin became the subject of an award-winning documentary film, many popular musicians took an interest in the Theremin. Today, there are probably more Theremins in use than ever before, and while few musical compositions are being writing exclusively for the Theremin, it nonetheless can be heard in the music of hundreds of bands and musicians of the past forty years including Aimee Mann, Alice Cooper, Black Eyed Peas, Cake, The Cramps, David Byrne, Elvis Costello, Incubus, The John Spencer Blues Explosion, Led Zeppelin, Marilyn Manson, Massive Attack, Nine Inch Nails, Phish, Pink Floyd, the Pixies, Portishead, Radiohead, The Spice Girls, Stereolab, Uriah Heap, The Ventures, Weird Al Yankovic, Warren Zevon and many others.

Retrieved from "https://ethw.org/w/index.php?title=Theremin&oldid=180978"
Categories:
This page was last edited on 19 August 2020, at 16:36.
About ETHW
Policies and disclaimers