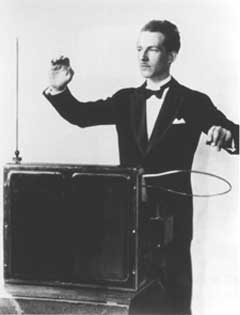 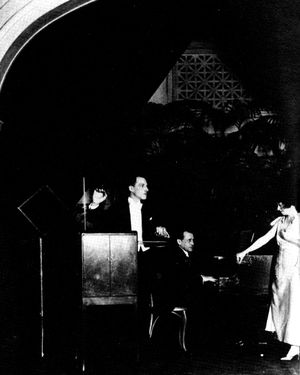 Leon Theremin played an influential role in the field of electronic musical instruments during the 20th century. Born in St. Petersburg, Russia with the name Lev Termen in 1896, Theremin’s father was a lawyer and his mother had an interest in the arts, especially music and drawing. Theremin grew to share his mother’s love of music. While still in high school he entered the conservatory and graduated with the title of “free artist on the violoncello.”

Theremin soon grew frustrated with the limitations of traditional musical instruments, and it was then that his interest in music intersected with another fascination—electricity. Theremin sought to invent an instrument that would allow for greater regulation and character of sound. The product of this desire was the Theremin. Unlike traditional machines that were mechanically operated, the Theremin operated electrically by having the player move his or her hands over the instrument in a way reminiscent of an orchestra conductor. The first Theremin was built in 1917 after the outbreak of the Russian Revolution and was demonstrated at the Moscow Industrial Fair in 1920, where it was a hit with the Bolshevik leadership. At the time, Theremin’s interest in finding a musical use for electricity dovetailed with the more general interest in the use of electricity of Vladimir Lenin, the Soviet Union’s first leader. After hearing of Theremin’s exhibition, Lenin asked for a private demonstration of the invention in his office in the Kremlin. With some assistance from Theremin, Lenin was able to play one of his favorite compositions, Russian composer Mikhail Glinka’s “Skylark.”

After this amazing start to his career, Theremin married his first wife, Katia Constantinova, in 1921 while working in Leningrad at the Ioffe Institute for Physics and Technology. He was assigned by the Soviet government to demonstrate his machine in Europe and later New York City, where his wife joined him. After Katia was linked to a fascist organization in the United States through some friends, the Soviet Embassy proclaimed the couple divorced. Although Theremin continued to speak to his ex-wife on occasion, Katia pursued a career in medicine in New York and Theremin went on to make several variations to his invention: the Terpistone, Rhythmicon, and Keyboard Theremin in 1930, and the Electronic Cello in 1932.

Government intervention into his marital affairs dogged Theremin through much of his life. After his divorce from Katia, Theremin married one of his students, an African-American ballet dancer named Lavinia Williams, but their time together in New York was cut short when agents of the Soviet Union’s secret police, the NKVD (precursor to the KGB), forcibly repatriated Theremin. Soviet dictator Josef Stalin charged him with treason on the grounds that he was disseminating anti-Soviet propaganda during his stay in the United States. As punishment for his alleged crime Theremin was sent to supervise road construction in Magadan, a Siberian labor camp infamous for its brutality.

After eight months in the camp, Theremin was transferred to a secret laboratory where he could use his technical skills. Among his work during this time was the development of the first “bug,” or electronic listening device. This work put him back in the good graces of the Soviet government and he was awarded the Stalin Prize (first class), the Soviet Union’s highest honor, and rehabilitated in 1945. He then married his third wife, Maria, who bore twin daughters, Helena and Natalia, in 1947.

Twenty years later, after retiring from his work on “special projects” for the KGB, Theremin took a post at the Moscow Conservatory, where he continued his work on electronic musical instruments. He was soon expelled in 1967, however, because he was told by the assistant to the director of the Conservatory that “electricity is not good for music; electricity is to be used for electrocution.” Unfortunately for Theremin, official Communist Party doctrine at the time held electronic music to be a form of modern music, which was supposedly pernicious to working-class sensibilities. Before his death in 1993, Theremin made a final visit to the United States to lecture and demonstrate the Theremin, which retains an avid following.

Retrieved from "https://ethw.org/w/index.php?title=Leon_Theremin&oldid=146503"
Categories:
This page was last edited on 3 February 2016, at 16:26.
About ETHW
Policies and disclaimers