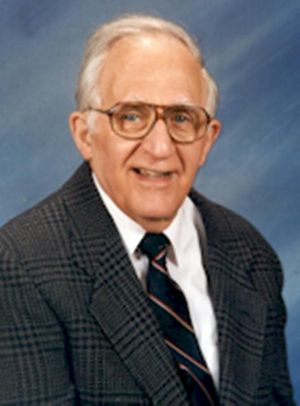 Theodore S. Saad was born on September 13, 1920 in Boston, Massachusetts. He obtained the B.S. degree in Electrical Engineering from the Massachusetts Institute of Technology in 1941.

Mr. Saad's first engineering position was with Sylvania Electric Products Inc. working on the manufacture and testing of fluorescent lamps. In 1942 he joined the MIT Radiation Laboratory, and was involved in a variety of projects concerning microwave technology. In November of 1945 he moved to the Submarine Signal Company as a Senior Development Engineer and Assistant Head of the Microwave Group in charge of design. Mr. Saad left Submarine Signal in 1949 to assist in the formation of a new company, Microwave Development Laboratories Inc., where he served as Vice President and Chief Engineer. In 1955, he co-founded Sage Laboratories, and became President and Chairman of the Board. Mr. Saad remained in that position until his retirement in September of 1993. As a working engineer he developed many microwave components and was awarded 17 patents.

Mr. Saad was a member of the second Administrative Committee of the IEEE Microwave Theory and Techniques Society (MTT) and has been an active participant eyer since. He served as Society President in 1958 and 1959. Some of his AdCom duties have included: Chairman, Editor of the Transactions and National Lecturer. He was responsible for the creation of the MTT Historical Collection and is the Historian of the Society. He was elected an MTT Honorary Life Member in 1974, and received a Centennial Medal of the IEEE in 1984. He was the first recipient of the MTT Distinguished Service Award in 1983, and received the MTT Career Award in 1992.

Mr. Saad is a Life Fellow of the IEEE and a Fellow of the American Association for the Advancement of Science. He was a member of the National Academy of Sciences Panel 272.00, advisory to the Radio Standards Engineering Division of the Institute for Basic Standards, National Bureau of Standards from 1967 through 1971. He was Chairman in 1969 and 1971.

Ted Saad and his wife, Fi, lived in Weston, MA with their two daughters.

Retrieved from "https://ethw.org/w/index.php?title=Theodore_S._Saad&oldid=174207"
Categories:
This page was last edited on 27 February 2019, at 19:11.
About ETHW
Policies and disclaimers