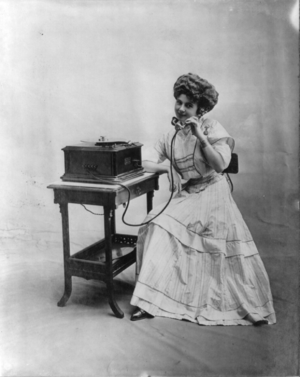 The audio tape recorder was invented just a few years after the phonograph, but most people would never hear about it until the 1950s. In the late 1870s, an engineer from New Jersey named Oberlin Smith came up with the idea of a “magnetic” recorder after seeing Edison’s work on the phonograph and the telephone. By using a telephone, an electromagnet, and a long piece of wire, he was able to capture sound as a region of varying magnetism rather than as a wavy groove.

Smith never demonstrated the recorder, but in the early 1890s the Danish inventor Valdemar Poulsen either read about it or reinvented it himself. Poulsen patented the recorder, which he called the “telegraphone” in 1899 and tried to sell the rights in various countries to manufacture it. In the United States, the rights were purchased in 1903 by a group of investors. They established the American Telegraphone Company of Washington, D.C. A factory was set up in Wheeling, West Virginia, but it was later moved to Springfield, Massachusetts.

American Telegraphone sold telegraphones for use as scientific instruments, telephone answering machines, and office dictating systems. While several hundred were sold to curious scientists, only one or two were actually used for telephone or dictation recording. After a few years, American Telegraphone closed its doors, and the magnetic recorder was not heard from in the United States for many years.

In Europe, the rights to the telegraphone were passed around to several German and English inventors, including Curt Stille, who developed a magnetic wire recorder. One of the most important of these inventors was Louis Blattner, who owned a movie studio in England. Blattner tried to synchronize motion pictures with a modified Poulsen recorder called the “Blattnerphone.” Blattner failed in this effort. His Blattnerphone, however, was sold to the Marconi Company of England, which in turn sold it to radio stations in the early 1930s. The “Marconi-Stille” tape recorder used at the BBC, the Canadian Broadcasting Company, and elsewhere around the world used a narrow steel tape.

The German companies AEG and I.G. Farben took a different approach in the late 1920s. These companies bought the patents of an obscure inventor named Fritz Pfleumer, who had patented a recording tape using a paper strip coated with magnetic iron powder. The new tape was cheap to make and much lighter than the old steel tape. I.G. Farben made the tape, and AEG made the new recorder, which was introduced as the “magnetophon” around 1932. The magnetophon was used extensively in the 1930s and 1940s at German and French radio stations, and by the end of World War II was the finest sound recording instrument available. Several magnetophons were captured by the Allies and Soviets in 1945, and became the basis of audio tape (and later video) recorders.

Retrieved from "https://ethw.org/w/index.php?title=Telegraphone&oldid=196565"
Categories:
This page was last edited on 15 December 2022, at 15:34.
About ETHW
Policies and disclaimers