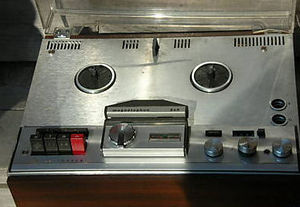 In 1936 the magnetophon, an improved version of Valdemar Poulsen’s magnetic recording invention, was introduced in Germany by the AEG and I. G. Farben companies. The magnetophon incorporated many new features, an important one being the use of a plastic-base tape. This was much lighter than the earlier solid metal bands, and made the machine smaller and less expensive. German radio stations used the magnetophon regularly in the late 1930s. It became a powerful propaganda weapon in the hands of the Nazi party, since it could easily be used to record and broadcast the Fuhrer’s long speeches. German engineers continued to improve the magnetophon until its sound quality exceeded that of the highest quality phonograph recorders, a fact that did not escape the attention of Allied engineers. When the first studio magnetophons were captured in 1945, they were transported back to France, Great Britain, and the United States to be copied.

Tape recorders based on the magnetophon were manufactured around the world in the 1950s. They were used in radio as they had been in Germany, but they also began to replace the disc recorders used in music studios. Within a few years, studio engineers had invented ways to cut-and-splice tape the same way motion picture film was edited and spliced. This meant that if a performer in the studio flubbed a note, it could be edited out and replaced by another recording of a good note. From this simple beginning, the use of the tape recorder revolutionized the recording of music. Now it was not enough to capture a performance, but much of the creative work needed to make a good record involved editing and modifying the sound in the studio.

Retrieved from "https://ethw.org/w/index.php?title=Magnetophon&oldid=154770"
Categories:
This page was last edited on 12 April 2017, at 13:52.
About ETHW
Policies and disclaimers