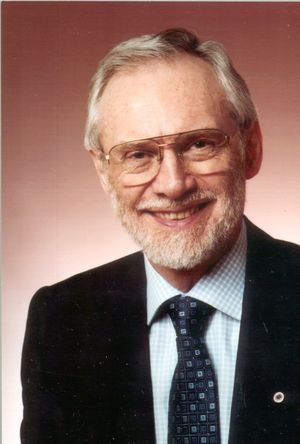 With over 30 years of service, Dr. Robert T.H. (Bob) Alden has helped improve the IEEE in countless ways, particularly in the introduction and application of electronic communications.

His many IEEE service titles include vice president, Regional Activities; Region 7 (IEEE Canada) director; and Hamilton Section chair. He helped drive the IEEE-wide adoption of e-mail, and aided staff in developing electronic support services and in planning the original IEEE Web site, which launched in 1995. Serving as Chair of the IEEE Electronic Communications Steering Committee from 1994-1997, Dr. Alden helped lay the groundwork for the IEEE e-mail aliases, Web hosting and mailing lists. in 2004-2005 he served as the first chair of the IEEE Information Technology Strategy Committe. Today, he continues to serve the IEEE Foundation and the IEEE Canadian Foundation as well as the IEEE Toronto Section.

As early as 1992, his regular column in The Institute, called “Traveling the Information Highway with Bob Alden,” introduced members to the applications of electronic communications and the many wonders of the Internet long before the import of that medium was widely appreciated. His career took him to the Sangamo Company in Toronto, Canada, the University of Toronto, McMaster University, the University of Sydney and finally, back to McMaster, where he is now professor emeritus. He led the development of the Power Research Laboratory at McMaster in 1984, and became its first director.

Bob won the 2002 IEEE Haraden Pratt Award 'For outstanding and sustained leadership in many areas of the IEEE especially in the use of electronic communication.'