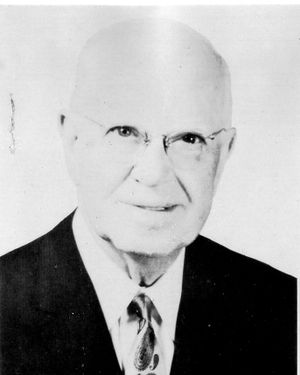 Robert J. Wiseman, was born in Cambridge, Massachusetts on July 18, 1890. He was educated in the public schools of Cambridge. He received the degree of Bachelor of Science in Electrical Engineering from the Massachusetts Institute of Technology in 1912. He continued studies at the Institute while serving as an Assistant Instructor and in 1915 received the degree of Doctor of Science. During his graduate study he received the Saltonstall Fellowship. His thesis for the doctor's degree was "The Dielectric Strength of Electric Cables." He investigated the theoretical formula for the dielectric strength of an insulated cable and proposed a modification to the formula to reconcile the difference between voltage breakdown in theory and in practice.

He remained at MIT as a Research Assistant until 1917 when he became a member of the Western Union Telegraph Co. Research and Engineering Department. In 1918 he joined the National Conduit and Cable Company as an Assistant Wire and Cable Engineer, and in 1921 became a member of The Okonite Company as a Research Engineer. In this capacity he contributed to improvement in the manufacture of rubber and varnished cambric cables and shared in the responsibility for the planning and erection of the company's Paterson, New Jersey plant and was in charge of its Research and Engineering Departments.

His major contributions to power cable technology have been in the area of high voltage cable engineering and research and development with particular emphasis on dielectric strength, thermal characteristics of insulation and performance under operating conditions. Other developments include work on conductor shielding and cable operation under pressure in oil-filled, gas-filled, and water-filled pipe lines. He was in charge of the research and development of the 345 kV Oilostatic Cable which underwent field tests at Cornell University 1961-1964. At the time of his retirement he aided in the development of a 500 kV Oilostatic cable which was tested at Waltz Mill, Pennsylvania by the [[Westinghouse Electric Corporation]] for the Edison Electric Institute.

Dr. Wiseman was a Fellow and Life Member of the IEEE and has participated actively in Institute affairs. He has served as Chairman of the AIEE Committee on Power Transmission and Distribution (1946-1947). It was during this period that the underground position of this committee was made a separate committee, which is now the Insulated Conductors Committee. He has been a member of the Board of Examiners, the Committee on Research, the Edison Medal Committee and the Engineering Foundation Board.

Dr. Wiseman was a member of the International Conference on Large Electric High Tension Systems (CIGRE), and prior to retirement, was the United States Technical Advisor on Committee No. 20, Electric Cables, of the International Elcctrotechnical Commission. He has been a member of the Committee on Insulation for both the National Research Council and the American Society for Testing Materials. He was an active member of the Insulated Power Cable Engineers Association of which he has served both as Secretary and as President. He has held membership in the Passaic Engineering Society, the New Jersey Society of Professional Engineers and the National Society of Professional Engineers. He is a member of the Montclair Society of Engineers and an Associate Member of the Institute of Electrical Engineers of Great Britain. In 1928, he was appointed Chief Engineer at Okonite and in 1950 was named Vice-President. He continued in these responsibilities until 1959, at which time he became Cable Consultant. He aided in the planning and erection of the new High Voltage Cable Plant which has been dedicated to him. He was the author of numerous technical articles and he has been granted three patents. A man with an extraordinary degree of objectivity and modesty, Robert J. Wiseman never sought recognition or acclaim. His efforts have been centered on the search for truth. Throughout the electrical industry he was recognized for his candor, conscientiousness and fairness. He generally has shared his time and extensive knowledge with his associates in the electrical industry. The men guided and developed under Dr. Wiseman arc a living monument to his ability and management leadership. Dr. Wiseman's hobby has been his work.

Retrieved from "https://ethw.org/w/index.php?title=Robert_J._Wiseman&oldid=171987"
Categories:
This page was last edited on 20 December 2018, at 18:41.
About ETHW
Policies and disclaimers