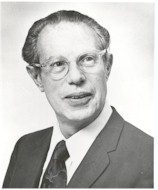 Robert Adler was born in Vienna in 1913. He received his doctorate in physics, from the University of Vienna in 1937. He became engaged in patent work there, and later went to England. After the war broke out, he came to Chicago and worked first in the field of measuring instruments.

Adler joined Zenith Radio in 1941. Ten years later he was made associate director of research in 1952, vice president in 1959, and director of research in 1963. In addition to his own research, in the thirty-five years after he joined the research group at Zenith, he played an increasingly important role in forging one of the great industrial research teams in the U.S., at times numbering more than three hundred people. When economic exigencies compelled a drastic retrenching of this activity, rather than preside over it, Adler resigned his post in 1978. Subsequently, he became research director of the Extel Corporation in Northbrook, Illinois, but continued consulting to Zenith until its merger with LG in 1999. He also served as adjunct professor of electrical engineering at the University of Illinois at Urbana.

Adler’s contributions span decades of television innovation. His earlier contributions include the gated-beam tube, which represented a new concept in receiving tubes. His noise-gated synch clipper and automatic gain control secured stability of television reception in the fringe areas. Low-noise devices continued to be part of his work, and his contributions to low-noise traveling-wave tubes became important in military communications. Later he applied the new principle of parametric amplification to electron beams.

Adler also contributed much to the development of electromechanical devices. He is perhaps best known as the co-founder of the wireless television remote control, a distinction he shares with fellow Zenith engineer, Eugene Polley. The roots of this innovation lay in his World War II work on high- frequency magnetostrictive oscillators. Interest in the interaction between light and ultrasound led to new ways of deflecting and modulating laser beams, using Bragg diffraction for television displays and in high-speed printing.

Adler later pioneered the use of acoustic surface waves in intermediate frequency filters for color television. His work on and ideas about surface acoustic waves have been incorporated into numerous products beyond television, including cellular telephones and touch screens. Concurrently he devoted attention to optical video disk players.

Adler was granted more than 150 U.S. Patents and published over 45 technical papers and articles. He was elected Fellow of the IEEE in 1951 "for his development of transmission and detection devices for frequency modulated signals and of electro-mechanical filter systems." He received the Outstanding Technical Achievement Award in 1958 for his “original work on ultrasonic remote controls” for television. Other awards include, the Inventor of the Year award from George Washington University in 1967, the IEEE Outstanding Achievement Award in Consumer Electronics in 1970, the Outstanding Technical Paper Award from the Chicago Section of the IEEE in 1974, and the Edison Medal in 1980. He was a fellow of the American Association for the Advancement of Science and a member of the National Academy of Engineering.

Retrieved from "https://ethw.org/w/index.php?title=Robert_Adler&oldid=146973"
Categories:
This page was last edited on 24 February 2016, at 20:29.
About ETHW
Policies and disclaimers