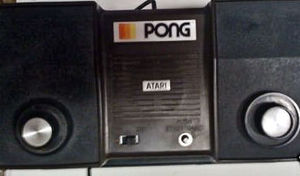 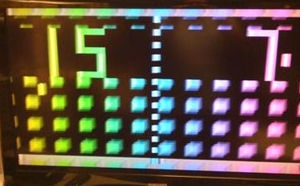 Pong, an electronic, coin-operated arcade game based on ping-pong, was one of the first games created for electronic game play. It was conceived by Nolan Bushnell, a former employee of the California electronics firm Ampex, who in 1972 created a company called Atari. Al Alcorn, a young engineer whom Bushnell hired away from Ampex, designed and built the prototype Pong game later that year.

Inside its cabinet was an ordinary television, along with integrated circuits to create the images on the screen. Players twisted two knobs on the machine's front panel to move the paddles on the screen back and forth, hopefully intercepting a fast-moving “ball.” The game rules were simple, but actually hitting the ball was enough of a challenge to keep players interested. Every time a player made contact with the ball, and when it bounced off the “walls” it made a funny electronic sound—like a “pong.”

Alcorn installed the prototype Pong game at a bar near the Atari headquarters. The instructions provided for the game were simple: “Avoid missing ball for high score.” A customer put the first quarter into the coin box, and the era of arcade video games was launched. Within a few days, Atari got a call from the bar owner, who complained that the game was broken. When Al Alcorn went to fix it, he discovered the cause—the cash box was so full of quarters that it had jammed.

Nolan Bushnell moved quickly to begin producing more Pong machines. He rented a building that had once held a roller skating rink and hired workers to make the machines as quickly as they could. While the prototype was housed in a small red box that could sit on a bar top, the production machines were in tall cabinets, painted bright yellow with the word “Pong” in large black letters. Over the next few years, before Atari moved on to more complex and interesting games, it sold 8000 Pong machines. Today, video games, including home and arcade games, are one of the most important consumer electronic products in the world. Their history shows how computing and electronic entertainment technologies began to merge beginning in the 1970s.

The Development of Pong: Early Days of Atari and the Video Game Industry - A First Hand History written by Alan Alcorn, Pong's designer

Retrieved from "https://ethw.org/w/index.php?title=Pong&oldid=120273"
Categories:
This page was last edited on 28 September 2015, at 18:53.
About ETHW
Policies and disclaimers