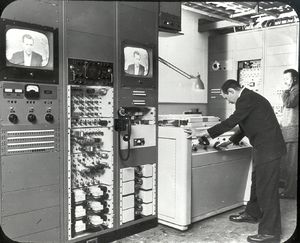 Man hunched over Ampex video machine in a studio with two screens (both showing a man's face) in foreground. Photo copyright: Ampex

Ampex is one of the most famous manufacturers of audio and video tape recorders in the world. The company had its start in 1944 in California. Alexander M. Poniatoff, an electrical engineer and an émigré from Russia, started the company in San Carlos, California, and made small electric motors that were used in military equipment. When the war ended in 1945, Poniatoff began looking for new products to make. He heard about the German Magnetophon, examples of which had been brought to the United States (and other countries). Because Germany had been defeated in the war, the Allied governments considered most German technology and patents up for grabs. Ampex engineers made many improvements to the original design but kept all of its key features. Engineers hired by Poniatoff, such as Harold Lindsay and Myron Stolaroff, helped design the first model, the Model 200, which was introduced in 1948 and became an instant hit among radio broadcasters and recording studios. Ampex recorders were sold worldwide, and many machines made in the early 1950s are still in use today. 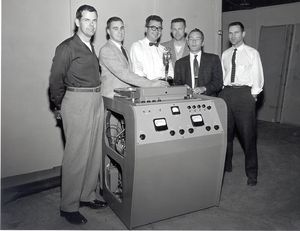 Industry Recognition: The six-man team that developed the first practical videotape recorder gather around the results of their labors, the Ampex Mark III, with the Emmy Award won by Ampex in 1957. They are, left to right, Charles E. Anderson, Ray Dolby, Alex Maxey, Shelby Henderson, Charles Ginsburg, and Fred Pfost. Photo courtesy: Ampex

One of the first customers for the Ampex audio recorder was the legendary singer Bing Crosby. In the middle 1940s, Crosby and his assistants were searching for alternative means to live radio performances. They began using phonograph recorders to capture their programs, but it was difficult to copy or edit the discs without degrading the sound. In 1947 Crosby became interested in the German Magnetophon recorder as a potential substitute, and for a brief time used a captured German Magnetophon on the air. However, this option was eventually discarded because there were only a few machines available and almost no spare parts. About that time, the Ampex 200 appeared, and Crosby was impressed. The CBS radio network ordered several Ampex machines to record Crosby’s shows, and became the first major network to regularly broadcast recorded material.

As Ampex recorders became the workhorses of the industry, their sales financed the creation of the next big product for Ampex: videotape recording. The company introduced its VTR-1000 recorder in 1955, and introduced the word videotape into our vocabulary (videotape was originally an Ampex trademark). As in the case of audio recording, the company was not the inventor of videotape recording technology, but its machines incorporated key improvements and became the standard in television studios for years to come.

Retrieved from "https://ethw.org/w/index.php?title=Ampex_Corporation&oldid=119902"
Categories:
This page was last edited on 14 September 2015, at 16:39.
About ETHW
Policies and disclaimers