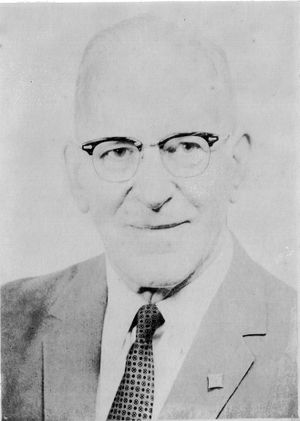 In 1912, Mr. Borden was employed by the Hydro Electric Power Commission of Ontario, and he remained with this organization until 1927. During these years he organized the Electrical Testing and Standardizing Laboratory, whose work included maintenance and standardizing of electrical instruments, meters and accessories; devised special tests on machines and apparatus, oscillograph tests in laboratory and in the field; did original work in methods, circuits, and apparatus for measuring electrical quantities, especially in alternating-current power networks including, specifically, investigation and appraisal of methods for measuring maximum demand, volt-amperes, reactive factor, power factor, and totalizing and telemetering of electric power loads. During these years he contributed importantly to the development of measurement techniques and equipments for large-scale power distribution systems.

In 1927 Mr. Borden came to the United States. entering the employ of the Bristol Company, Waterbury, Connecticut. As a development engineer, he was engaged in the design of a self-balancing recording potentiometer employing the electro-mechanical balancing principle. For process applications, he developed a system for the control of hot blast temperature in blast furnace operation. He developed apparatus for pneumatic control of processes, including a cycle controller used for automatically programming process operations. He developed a repulsion form of mechanism used in a line of direct-acting recording voltmeters and ammeters. His early work on thermal converters for the measurement of electric power served as the basis for advancement of this widely used and highly reliable transducer principle. He was largely instrumental in the exploitation of the impulse-duration telemetering systems which have had widespread application to this day.

In 1942, Mr. Borden became supervisor of patent activities at the Bristol Company, serving both the company's engineers and the patent attorneys. In this capacity he was able to stimulate and assist in the inventive efforts of others, compiling and preparing several hundred patent applications, including a number of his own. His inventive abilities were responsible for many improvements in the field of electric-power telemetering and the wider field of instrumentation and automatic control applied to the process industries.

Mr. Borden has been a very active member of the AIEE since 1913, first in the Toronto Section, then later in the Connecticut Section. He was elected a Fellow of the Institute in 1944 and became a Member-for-Life in l948. His special technical interest has been the important Instruments and Measurements Committee, which in 1956 was given Division status. He has served with this group from 1921. He was also active in the work of its subsidiaries, especially the Subcommittee on Telemetering and the Subcommittee on Recorders and Controllers. In these he held various offices and made significant contributions to projects, programs, and conferences, which have advanced this very important branch of electrical engineering.

As a lecturer on instrumentation subjects he has transmitted to his audiences his enthusiasm and broad knowledge of this field by his unusual speaking ability. He has traveled widely in the United States and Canada, addressing AIEE Section Meetings and other Technical and Engineering Groups. He has been also a prolific writer on these subjects, the list of which includes some thirty papers published in the AIEE Transactions and other journals, as well as numerous discussions and book reviews. He is senior author of two well-known texts on Telemetering, and was a contributor to the latest edition of the Standard Handbook for Electrical Engineers.

Although he reached the age of retirement from the Bristol Company in 1955, he refused the life of professional inactivity, and in 1956 he was appointed to the faculty of the University of Dayton as Associate Professor of Electrical Engineering. In 1958 he received a member-at-large appointment to the Instrumentation Division Committee of AIEE. In 1959 he served as Honorary Chairman of the National Conference on Analog and Digital Instrumentation.

At the time of his retirement in 1955 from the Subcommittee on Recorders and Controllers, the Chairman of the Subcommittee acknowledged Mr. Borden's contributions with the comments: "I have not had the pleasure of knowing you personally but for a few years. In that time, however, I have come to recognize you as one of those people who are the cornerstone of our profession. You have made many important technical contributions; you are a distinguished inventor, author, and a hard worker with a true understanding of the responsibilities of the professional man."

Mr. Borden resided in Dayton, Ohio. However, during the summer months of the past few years he has done extensive traveling in the United States and in Canada, visiting with family and friends, and participating in AIEE meetings and conferences.

Retrieved from "https://ethw.org/w/index.php?title=Perry_A._Borden&oldid=172306"
Categories:
This page was last edited on 4 January 2019, at 21:32.
About ETHW
Policies and disclaimers