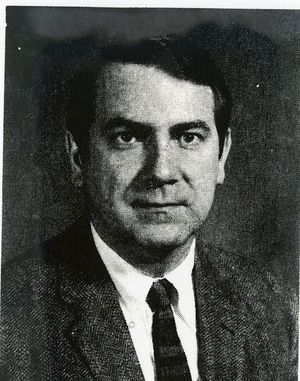 Paul Charles Michaelis was born on June 18, 1935. He earned his bachelor's in electrical engineering and his master's in physics, both from the Newark College of Engineering (Now New Jersey Institute of Technology). In 1953 he joined Bell Laboratories, where he concentrated on magnetics, fiber optics, electrical circuits and mechanics. One of his projects dealt with the development of underwater listening devices for the U.S. Navy. Another one of his most notable achievements was his contribution to the development and invention of the magnetic bubbles concept. The IEEE recognized this accomplishment in 1975. He received the IEEE Morris N. Liebmann Memorial Award, with A.H. Bobeck and H.E.D. Scovil, "For the concept and development of single-walled magnetic domains (magnetic bubbles), and for recognition of their importance to memory technology."

Retrieved from "https://ethw.org/w/index.php?title=Paul_Michaelis&oldid=166544"
Categories:
This page was last edited on 1 October 2018, at 17:52.
About ETHW
Policies and disclaimers