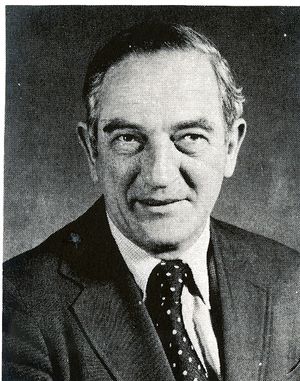 Dr. Henry Evelyn Derrick Scovil was born in 1923 in Victoria, British Columbia, Canada. He is recognized most widely for his contributions to the formation and development of the applied usage of bubble memory and solid-state masers.

Scovil earned his D.Phil from the University of Oxford in 1951. He then joined Bell Laboratories. Here, he worked with George Fahrer and H. Seidel to create the first turnable, solid state maser. In the late 1950s, Scovil helped construct ruby travelling wave masers which, at that time, were the lowest-noise microwave amplifiers in the world.

Scovil's work with masers and bubble memory has been recognized by the Franklin Institute (1972 Stuart Ballantine Medal), and the IEEE (1975 IEEE Morris N. Liebmann Memorial Award). Scovil authored or co-authored several technical papers and in 1978, he was elected to the National Academy of Engineering. Scovil passed away on May 11, 2010 in Port Townsend, Washington.

Retrieved from "https://ethw.org/w/index.php?title=Henry_Scovil&oldid=166546"
Categories:
This page was last edited on 1 October 2018, at 17:53.
About ETHW
Policies and disclaimers