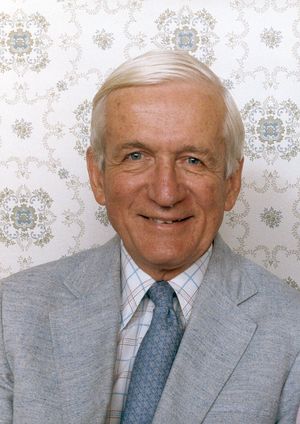 Norman Foster Ramsey was born in Washington, D.C. on 27 August 1915. He married the late Elinor Jameson on June 3, 1940 and four daughters were added to the family. Ramsey was educated in the United States and England; he earned five degrees in physics including the Ph.D. (Columbia 1940) and the D.Sc. (Cambridge, 1964).

Ramsey's scientific research focussed on the properties of molecules, atoms, nuclei and elementary particles and includes key contributions to the knowledge of magnetic moments, the structural shape of nuclear particles, the nature of nuclear forces, the thermodynamics of energized populations of atoms and molecules (e.g. those in masers and lasers) and spectroscopy.

Ramsey not only contributed basic advances in the theoretical understanding of the physics involved in his research, he also made pioneering advances in the methods of investigation; in particular, he contributed many refinements of the molecular beam method for the study of atomic and molecular properties, he invented the separated oscillatory field method of exciting resonances and, with the collaboration of his students, he was the principal inventor of the atomic hydrogen maser. The separated oscillatory field method provides extremely high resolution in atomic and molecular spectroscopy and it is the practical basis for the most precise atomic clocks; likewise the atomic hydrogen maser made even higher levels of spectroscopic resolution possible and it also functions as the basis for atomic clocks having the highest levels of stability for periods extending to several hours.

During World War II, Ramsey joined the M.I.T. Radiation Laboratory where he headed the groups that developed the first three centimeter wavelength magnetrons and the related radar systems. Later he became a group leader at the Los Alamos Laboratory. After the war, Ramsey returned to Columbia University until 1947 when he joined the faculty at Harvard; he became Higgins Professor of Physics in 1966.

Ramsey was the executive secretary of the group that established Brookhaven National Laboratory and he became the first Chairman of the Brookhaven Physics Department. He served as the first Science Adviser to the Secretary General of NATO from 1958-1959. He was a founding Trustee of Universities Research Association for the construction of the 200 Gev accelerator at Batavia, Illinois and he served as president of the Association from 1966 to 1972. He was President of the American Physical Society in 1978-1979.

Ramsey's contributions have been recognized by many prestigious awards including the Presidential Certificate of Merit (1947), the E. O. Lawrence Award (1960), the Davisson-Germer Prize (1974) and the Columbia Award for excellence in science (1980). He received the IEEE Medal of Honor in 1984, "For fundamental contributions to very high accuracy time and frequency standards exemplified by the cesium atomic clock and hydrogen maser oscillator." He is a Fellow of the American Physical Society and is a member of the National Academy of Sciences. Ramsey has written and published five books and he is the author or co-author of more than 300 scientific papers.

Ramsey enjoys outdoor activities with his family including, particularly, cross-country skiing and camping; he is especially fond of his many acres of wilderness in Nova Scotia.

Retrieved from "https://ethw.org/w/index.php?title=Norman_F._Ramsey&oldid=146749"
Categories:
This page was last edited on 9 February 2016, at 20:15.
About ETHW
Policies and disclaimers