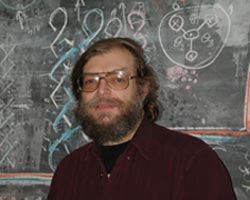 Nadrian “Ned” Seeman is a chemist who works in the field of molecular biotechnology. He was born in Chicago in 1945. He received a B.S. in biochemistry from the University of Chicago and, in 1970, a Ph.D in biological crystallography from the University of Pittsburgh. He did postdoctoral work at Columbia from 1970-1972, and at the Massachusetts Institute of Technology from 1972-1977. He later obtained a position at SUNY-Albany, and is currently Professor of Chemistry at New York University.

Seeman argues that molecular biotechnology represents an important research area for developing practical nanotechnology applications. “Molecular biotechnology is a promising point from which nanotechnology can evolve,” he argues, “because living systems can be thought of as a successful example of atomic and molecular manipulation on the nano-scale.” To date, Seeman and his research team at NYU have focused their efforts on exploiting the natural tendency of branched DNA to assemble itself into coherent structures. Due to intermolecular forces, unpaired DNA strands seek out and “stick” to complementary strands. As a result, biological systems are able to self-assemble their components into complex molecular structures on the nanometer scale. By synthesizing branched DNA and exploiting this behavior, Seeman and his colleagues have managed to assemble increasingly complex structures that do not occur in the natural environment.

Using these techniques, in 1991 Seeman and his colleague Junghuei Chen built a molecular cube made from branched DNA. They started by designing two long and eight short pieces of single-stranded DNA on a computer, which they then synthesized. The long chains attracted each other, forming loops, which then linked to the shorter strands to form a cube. Building on this success, in 1999 Seeman and his co-workers at New York University constructed a complex nanomechanical device. It had two rigid arms that could be rotated among six different positions by adding chemicals to the device’s environment. More recently, Seeman and his research team constructed a tiny device that “walked” across a DNA “sidewalk.” As Seeman describes it, “each foot was tied down by a strand of DNA. We would rip off that strand, and then the foot was free to wander around, and then we'd put in another strand to tie it down and make the next step.” Seeman argues that these devices represent the first steps towards the development of nano-scale robots that will one day be able to construct individual molecules. His eventual goal is to be able to synthesize periodic matter and to assemble a biomechanical computer.

Professor Seeman has won the Sidhu Award (1974), the Feynman Prize in Nanotechnology (1995), the Tulip Award in DNA-Based Computing (2004), and the Merit Award from the National Institute of General Medical Sciences (2005). In 1998 he was elected Fellow of the American Association for the Advancement of Science, and in 2005 he was elected Fellow of the Royal Society of Chemistry. Seeman is particularly excited about the potential of his work as it applies to computing. “As things in the computer world keep getting smaller,” he says, “they’re reaching the point where top-down approaches—trying to make big things smaller—are hitting the wall. What we’re doing is building from the bottom up—taking little things and making them bigger. And DNA lets you do true 3-D integration…the point is that what we’re doing is inherently three dimensional, which at the nano level is pretty amazing.”

Retrieved from "https://ethw.org/w/index.php?title=Nadrian_Seeman&oldid=146711"
Categories:
This page was last edited on 9 February 2016, at 18:35.
About ETHW
Policies and disclaimers