DNA - From Nature to Technology 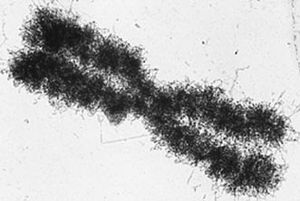 During self-replication, cell DNA is wound up into a compact mass, which can be easily seen in a microscope.

DNA is a chemical compound found inside the nucleus of a living cell which contains all the genetic information about an organism. DNA molecules act like little factories—they produce proteins, which then build or maintain all the systems of the body. The makeup of DNA varies from species to species, and as a result the proteins made by the DNA also vary from species to species. These differences account for all the varieties of organisms found in nature from bacteria, to plants, to humans. The DNA molecule itself consists of a large number of chemical compounds, bound together into a sort of rope-like structure. When it comes into contact with the various chemicals in the body, the DNA causes chemical reactions that result in the formation of certain proteins. Also, when a cell divides (which happens regularly), the DNA replicates itself: the molecule splits down its length, and each half forms a new DNA strand.

In the late 1970s, engineers learned how to chop DNA strands into pieces, reassemble them into combinations never found in nature, and then use the DNA to create new types of proteins. They could even “splice” a little bit of DNA into the existing DNA of an organism like a bacterium, turning the bacterium into a custom protein factory. The benefit of doing that was that the modified bacteria would reproduce, resulting in greater and greater output of the desired protein product. This “recombinant” DNA inside bacteria is used to do things like produce insulin, a substance produced in normal human bodies that is lacking in people with diabetes.

In more recent years, scientists and engineers have looked to DNA for ideas about the next generation of molecule-size chemical “factories,” not only for natural products but for all sorts of new materials. Because DNA so readily makes and breaks chemical bonds, reconnecting and modifying materials at the atomic level, engineers believe that studying it may reveal ways to make molecule size machines called “assemblers,” or even molecule size computers. DNA, in other words, is likely to be modified to suit entirely new purposes, becoming the first in what engineers imagine will be a flood of new, tiny “nanotechnologies” that will become much more important in coming years.

Retrieved from "https://ethw.org/w/index.php?title=DNA_-_From_Nature_to_Technology&oldid=119979"
Categories:
This page was last edited on 14 September 2015, at 17:35.
About ETHW
Policies and disclaimers