On 22 March 1905, the first successful clinical recording of a human electrocardiogram (ECG) took place at this location, which at the time was the Academic Hospital Leiden. Willem Einthoven’s pioneering work, from 1901 to 1905, resulted in a string galvanometer specifically designed to measure and record the heart’s electrical activity, which made this medical achievement possible. This invention marked the beginning of electrocardiography as a major clinical diagnostic tool.

We intend the plaque to be mounted at eye level on a pillar in the entrance hall of the Leiden University Medical Center, where the first cardiogram from a patient was recorded via a telephone link and using the string galvanometer. The pillar (see Fig.1) is a few meters from the door of the main entrance. 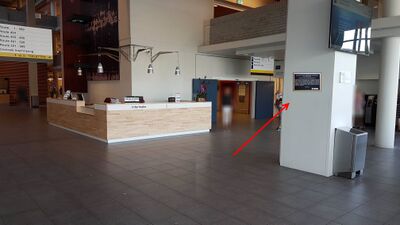 Fig.1 The position of the plaque in the entrance hall of the Leiden University Medical Center. In the background is the reception desk.

The LUMC is publicly accessible, but there is permanent surveillance by guards and video camera.

Einthoven improved the string galvanometer to record the electrical current generated by the heart, and derived by electrodes on the body surface: the electrocardiogram (ECG) [1]. Einthoven and his contemporary international colleagues working in this field faced the problem that their equipment had to be sensitive enough (the maximal amplitude of the ECG is 1-2 mV, which is difficult to measure without electronic amplifiers) and also had a sufficiently high frequency response (much of the energy of an ECG is below 30-40 Hz, but higher frequencies are essential, and the current international ECG standard requires 150 Hz as upper frequency, while even 250 Hz is required for pediatric ECGs). At the turn of the 19th to 20th century, there was no instrument available with combined sufficient bandwidth and sufficient sensitivity to measure and record this type of signals. The string galvanometer originally developed by Ader was by far too insensitive to meet these requirements.

The string galvanometer developed by Einthoven consisted of a thin silver-plated-quartz fiber to conduct the ECG current [1]. When placed in a magnet field, the fiber is displaced due to the force of the magnet field on the current. This is the same effect as is used in the electric motor. Since the heart beat current is very weak so is the displacement of the fiber. Therefore, the magnet field had to be very strong. Einthoven projected the shadow of the moving fiber on a running film sheet to record the signal and used an optical system to enhance its displacement considerably. 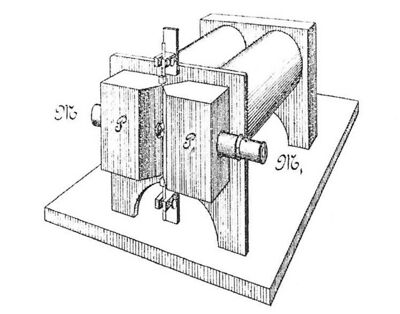 Fig. 2 Design drawing of the string galvanometer. In front the two poles of the electromagnet close to each other and the string in the narrow space in between. Also visible is the microscope assembly to record the string movement.

Einthoven had to overcome several obstacles in order his invention to be applied in medical practice. Initially he approached the German instrument maker Siemens & Halske. They answered him that the instrument didn’t fit into their production lines. Next Einthoven contacted two Dutch instrument making shops with the question to produce the equipment. However, the device was very bulky, heavy (some 600 lbs) and complicated to operate; five people were needed to make an electrocardiogram. The instrument makers convinced Einthoven that considerable effort was required to simplify the design and to make it market-ready. They had no time and money to do that job. Moreover, they estimated that only a small number of devices could be sold and no return on investment could be achieved. His following effort was more successful.

The Cambridge Scientific Instruments Company (CSI) was closely associated with the famous Trinity College. At the beginning of the 20th century Trinity was the centre of experimental science in Cambridge. Under Horace Darwin, CSI probably became even more embedded in the Cambridge academic world. Cambridge’s liberal education system, which delivered gentlemen and not businessmen, would influence Darwin strongly. For Darwin, solving a scientific problem with the aid of instrumentation was more important than earning money with it. Sales records show that even the profitable instruments could not cover the losses made from the development of specialised equipment.

When Einthoven contacted Darwin in 1903, the latter had been producing scientific instruments for a number of years. In the Einthoven archive, the correspondence starts with CSI’s reply to a publication Einthoven had sent them. How Einthoven made contact with the company can only be guessed at, although it might be possible that someone in Einthoven’s scientific network had pointed him in the direction of CSI.

This company was a workshop for the development and supply of physiological instrumentation for the Cambridge scientific community. From the start, CSI showed an interest in manufacturing Einthoven’s string galvanometer. CSI could see the potential of the instrument but also realized that it had to be changed before it would sell. Before Einthoven and CSI came to a business agreement, legal difficulties appeared to put the agreement into jeopardy. At the same time as arranging a business deal with CSI in the United Kingdom, Einthoven was also negotiating an agreement with the firm of Max Edelmann in Germany. Edelmann’s physico-mechanical institute produced electrical measuring devices at the beginning of the 20th century and was located in Munich. Edelmann was very interested in manufacturing Einthoven’s apparatus. It was not long before Einthoven was caught up in the middle of competition between CSI and Edelmann. CSI was clearly trying to protect its English and American markets. But the company was threatened by Edelmann, who wanted access to the same markets. Edelmann was unwilling to leave the English and American markets to CSI. The matter was made more complicated by the fact that Einthoven did not own the patent rights to the instrument. He did not own these rights because there was no patent law in the Netherlands between 1869 and 1910. It is not clear why Einthoven did not claim the rights to the instrument in England and Germany. While Einthoven and CSI were building up a fruitful relationship, the association with Edelmann was taking a turn for the worse. After 1907, the agreement was cancelled unilaterally by Edelmann.

CSI improved the design and the first commercial instruments to be sold were marketed as physiological instruments. In 1905 a CSI instrument was sold to a physiological laboratory in Sheffield. The whole system was mounted on a table, so that it was easier to install. Actually, the string galvanometer might prove its worth in any job where small, rapidly alternating currents had to be recorded, and CSI wanted to reach a wider market than the physiological laboratories alone. A list of the first customers to buy the string galvanometer shows that the first models were not sold exclusively to physiologists or physiological institutions. The other organizations used it for telegraphic purposes. Although the string galvanometer was produced and found its way to customers, it was not until the further development of the field of cardiology that it became a predominantly medical instrument. Einthoven stayed in touch with the CSI Company until 1919 as an adviser. 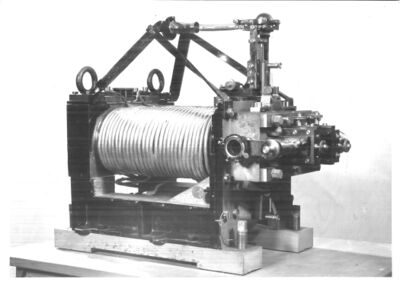 Fig. 3 Finished string galvanometer. The long sides of the magnet are covered together by the windings of the tube for water cooling.

Having initially turned down Einthoven’s offer in 1902, Siemens renewed its interest in the instrument when the company read about Einthoven’s experiments in the Nord Deutsche Algemeine Zeitung. After Einthoven’s visit to Berlin the two parties discussed legal aspects. For Siemens legal protection for their innovations was a critical factor. Siemens wanted to know from Einthoven if he had any patents. However, by mid-1913 Siemens had two reasons for abandoning the string galvanometer for a second time. Being able to take out patents on Einthoven’s instrument was a cardinal point for them. Siemens published a new catalog for its medical instrument range in 1913 that included its own cardiograph, based on the so-called mirror galvanometer. Einthoven’s work on the development of the string galvanometer did merit a mention in the introduction to this catalog, but there was also reference to the drawbacks of the heavy and bulky design of his type of cardiograph. This first type of cardiograph marked the beginning of Siemens’s technological involvement in the field of cardiology.

When Einthoven started his experiments, several others were involved in developing sensitive galvanometers to record the electrical signal of the heart. However, none of these approached the sensitivity and reliability of Einthoven's string galvanometer.

Einthoven started to analyze the data resulting from the experiments performed with the Lipmann capillary electrometer, the Arsonval galvanometer and the Thomson galvanometer. This analysis led him to investigate the physical/mathematical characteristics of the instruments. Lipmann’s electrometer in particular held his attention. Not being a physicist, Einthoven had to overcome the problems of the mathematical equations. With the help of Nobel prize winner H. A. Lorentz (1853–1928), the famous Leiden professor of physics, he was able to solve the mathematical calculations that modeled the physical behavior of the mercury column. This mathematical approach provided him with a sound basis for fundamentally improving the string galvanometer. This instrument would combine the best of both worlds: the swiftness of the galvanometers and the sensitivity of the capillary electrometer.

Einthoven conducted clinical trials when he connected his laboratory with the academic hospital Leiden. The string galvanometer he had constructed was too heavy to be transported to the hospital. However, patients at the academic hospital were connected to the string galvanometer in Einthoven’s laboratory at about 1.5 km distance by means of a telephone line. Readable electrocardiograms were successfully taken. Based on these clinical recordings Einthoven characterized the shape of electrocardiograms as a number of successive “waves”, the in the time zones P, Q, R, S, and T and U waves, a convention which is still in use.

The first time a patient's electrocardiogram was successfully recorded in this way was on Mach 22, 1905. This becomes evident from Einthoven's paper Reference [7] on page 127. 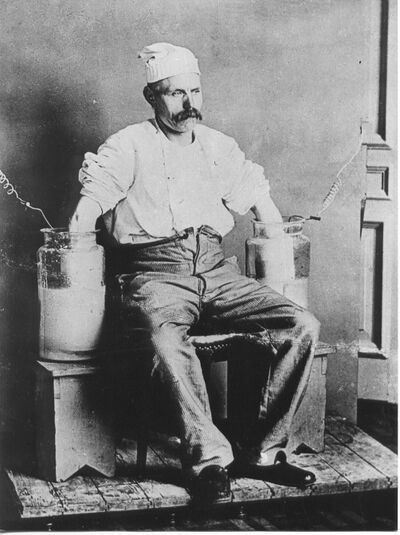 Fig. 4 Patient sitting in the university hospital while his telecardiogram is being taken in the physiological laboratory. The hands are immersed in a strong salt solution (NaCl) for good contact between the body and the telephone line.

In 1924, Einthoven was awarded the Nobel Prize in Physiology or Medicine "for his discovery of the mechanism of the electrocardiogram".

Nota bene: In the days of Einthoven, the lingua franca of science was dynamically changing. This caused Einthoven to write his scientific papers in German, in French and later also in English. The non-English titles of the following reference list have all been translated into English [English titles between square brackets]. Papers in the English language have been marked by an *.

[13] Einthoven W., Fahr G. and De Waart A., "Über die Richtung und die manifeste Grosse der Potentialschwankungen im menschlichen Herzen und uber den Einfluss der Herzlage auf die Form des Elektrokardiogramms", [On the direction and manifest size of the variations of the potentials in the human heart and on the influence of the position of the heart on the form of the electrocardiogram]. Pflugers Arch ges Physiol 150: 275-315, 1913.

[14*] Hoff H.E. and Sekelj P., "On the direction and manifest size of the variations of potential in the human heart and on the influence of the position of the heart on the form of the electrocardiogram", [Translation of Einthoven W., Fahr G. and De Waart A., "Über die Richtung und die manifeste Grosse der Potentialschwankungen im menschlichen Herzen und uber den Einfluss der Herzlage auf die Form des Elektrokardiogramms", Pflugers Arch ges Physiol 150: 275-315, 1913]. Am Heart J 40: 163-211, 1950

[15*] Einthoven W., "The string galvanometer and the measurement of the action currents of the heart", (Nobel Lecture, December 11, 1925). In: Nobel Lectures, Physiology or Medicine 1922-1941, Elsevier Publishing Company, Amsterdam, 1965