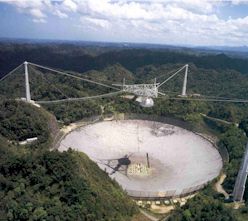 The Arecibo Observatory, the world's largest radiotelescope, was dedicated in 1963. Its design and implementation led to advances in the electrical engineering areas of antenna design, signal processing, and electronic instrumentation, and in the mechanical engineering areas of antenna suspension and drive systems. The drive system positions all active parts of the antenna with millimeter precision, regardless of temperature changes, enabling the telescope to maintain an accurate focus. Its subsequent operation led to advances in the scientific fields of radioastronomy, planetary studies, and space and atmospheric sciences.

In order to use radio waves to explore space, scientists had to overcome one crucial obstacle: the weakness of cosmic signals. Cosmic radio signals are so weak, in fact, that all the energy collected by all the radio telescopes on our planet during the more than sixty-year history of radio astronomy amounts to no more than the energy released when a few raindrops hit the ground. An enormously sensitive collector of radio waves, such as the giant Arecibo radio-radar telescope, was needed to capture these signals. The Arecibo radar telescope was conceived by William E. Gordon, then a professor of electrical engineering at Cornell University. Gordon wanted to study the properties of the Earth's upper atmosphere, the ionosphere, and thought that he could use a radar system to measure the density and temperature in this difficult-to-study atmospheric region. His calculations indicated that an antenna approximately 305 meters (1,000 feet) in diameter would do the job, but would be far too expensive to build using existing designs for radio and radar antennas. To construct a telescope of the size he needed, Gordon hit on the idea of using a spherical, bowl-shaped reflector fixed in the ground, with a movable receiver hanging above it. This permitted the beam to point in a 20-degree range of directions around the zenith, or overhead direction. Such a telescope would be most useful in a location where the Sun, Moon, and planets pass almost directly overhead. Puerto Rico offered the extra advantage of Karst terrain-small, deep valleys surrounded by limestone hills-and a natural sinkhole south of the city of Arecibo provided an economical way to support the spherical reflector. Built in three years, the Arecibo Ionospheric Observatory began operations in 1963. Gordon's concept of using radar to study the ionosphere-called incoherent scatter radar-was successful. In addition, the telescope allowed radio measurements of a host of objects in the solar system, in our galaxy, and beyond. Arecibo Observatory is now part of the National Astronomy and Ionosphere Center (NAIC), a national research center operated by Cornell University under cooperative agreement with the National Science Foundation. The observatory is used by scientists from all parts of the United States and around the world.

With the completion in 1997 of the $25 million Gregorian reflector system suspended 137 meters (450 feet) above the telescope's 305-meter (1 ,000-foot) diameter dish, together with the construction of a ground screen and powerful new radar transmitter, the Arecibo telescope remains unmatched in its sensitivity and versatility for radio studies of the atmosphere, the solar system, and the universe.