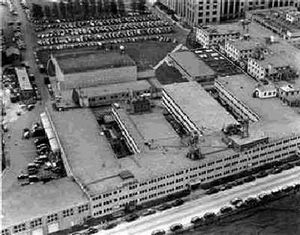 The MIT Radiation Laboratory, operated on this site between 1940 and 1945, advanced the allied war effort by making fundamental contributions to the design and deployment of microwave radar systems. Used on land, sea, and in the air, in many adaptations, radar was a decisive factor in the outcome of the conflict. The laboratory's 3900 employees made lasting contributions to microwave theory and technology, operational radar, systems engineering, long-range navigation, and control equipment.

The plaque can be viewed just off the Infinite Corridor at MIT, 77 Massachusetts Avenue, Cambridge, MA 02139.

Radar, an acronym for radio detection and ranging, was patented by British scientist Sir Robert Watson-Watt for meteorological applications in 1935. Since practical applications for airborne microwave radar had not been developed before World War II, the government of England requested assistance from the U.S. National Defense Research Committee (NDRC) to develop this capability. Britain's secret Tizard Mission was dispatched to Washington, D.C. in September 1940 to introduce the 10-centimeter cavity magnetron. In October 1940, MIT was chosen for the site of an independent laboratory that would be staffed by civilian and academic scientists from every discipline. Fourteen months before the U.S. entered World War II, MIT's newly formed Radiation Laboratory began its investigation of microwave electronics.

During World War II, large-scale research at MIT's Radiation Laboratory was devoted to the rapid development of microwave radar. Projects included physical electronics, microwave physics, electromagnetic properties of matter, and microwave communication principles. The "Rad Lab" designed almost half of the radar deployed in World War II, created over 100 different radar systems, and constructed $1.5 billion worth of radar. At the height of its activities, the Rad Lab employed nearly 4,000 people working on several continents. What began as a British-American effort to make microwave radar work, evolved into a centralized laboratory committed to understanding the theories behind experimental radar while solving its engineering problems.

The Rad Lab formally closed on December 31, 1945, and its staff members resumed peacetime their activities. In its wake remained tons of surplus equipment and the concept for a basic research center that was to continue in MIT's Research Laboratory of Electronics.