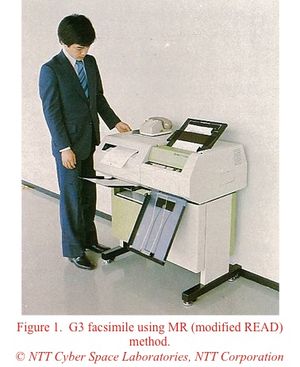 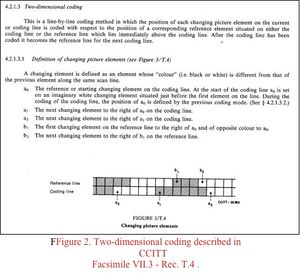 The plaque can be viewed at the NTT Cyber Communications Laboratory Group, Yokosuka City, Kanagawa, Japan.

At first, only a few companies could afford facsimiles and each company bought paired sets to communicate with themselves; there was little demand for the cross-company connection of facsimiles. The early international standard on facsimiles, Group 1(G1), was issued in 1968 [1]. However, there was little communication based on this standard.

Released in 1976 [2], the G2 facsimile (the so-called "three minute facsimile") was the breakthrough needed to stimulate the interconnection of facsimiles. The larger market sparked by the standard lead to a proliferation in the models available and a steady fall in prices. More people were sending facsimile messages and they hated waiting for each page to send. More advanced standards became the goal of international and domestic research activities.


In 1972, the telephone facsimile service attracted attention as an office communications tool for corporate customers. Its spread advanced new types of business communication in which drawings and images such as architects' plans and proposals were transferred between parties.
Both G1 and G2 facsimiles were dropped as recommendations in 1996 with the rapid adoption of the digital G3 facsimile standard.

G3 facsimile realized the one-minute facsimile by adopting the MR method, the most advanced two-dimensional encoding method developed through the collaboration of NTT and KDDI. It enabled the intercommunication of all facsimiles throughout the world. The rapid standardization precluded the market from being flooded with proprietary systems, while ensuring the freedom needed to compete with additional features and reduced cost. The rapid penetration of G3 facsimile proved these achievements.

The G3 facsimile (the "one-minute facsimile") was recommended as 'Redundancy suppressive digital facsimile' in 1980 [3]. At this time, Japan took the lead, and two-dimensional coding was examined by CCITT as the basic facsimile redundancy reduction method. Joint proposals were made by KDD (Kokusai Denshin Denwa Co., Ltd., now KDDI) and Nippon Telegraph and Telephone Public Corporation (now Nippon Telegraph and Telephone Corporation or NTT) [5]-[7].
Of particular import was the release of digital facsimile equipment that used the MR method, which offered twice the compression performance of the standard coding method (MH coding) at that time.


The biggest issue was the related intellectual rights, but this was resolved when the Japanese delegates declared at the Kyoto meeting of CCITT that if the MR method was adopted as the international standard, the patents and property rights would be offered free of charge. Most pending issues were completely settled by this offer from the Japanese delegates, and the Kyoto meeting of CCITT finished smoothly as a result. Reaching agreement on this recommendation was a strongly held goal of Japan.


The rapid standardization precluded the market from being flooded with proprietary systems, while ensuring the freedom needed to compete on additional features and reduced cost. The rapid penetration of G3 facsimile validated these achievements [8]-[10]. In 1981, NTT began the Facsimile Communications Network (F-Net) Service, making facsimile an essential service for business [11]-[19].

The MR method was extended to yield the MMR method; it was adopted as ITU-T recommendation T.6 in 1984 and is the coding method of the current G4 facsimile [4]. This recommendation was issued for "For telematique equipment and ISDN (Integrated Service Digital Network)." The MMR method is still used to realize high-speed facsimile communication.

On the dedication of the Milestone:

Milestone-Nomination:International Standardization of G3 Facsimile in 1980